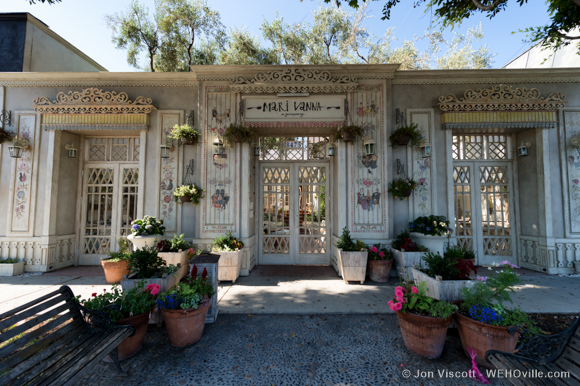 [dropcap]O[/dropcap]nce upon a time in Russia, a mythical woman named Mari Vanna welcomed diners into her home with open arms, feeding them traditional Russian fare on her finest china and linens. All were welcome and those who frequented were graced with a key of their own to return whenever they wished – this from Mari Vanna’s website.

And Ginza Project – the Russian hospitality group behind this kitschy new restaurant now open on Melrose Place – is not kidding about the key. VIP keys are handed out to select patrons. These keys will get you into the restaurant on Monday nights when the place becomes a private affair. Also, the key affords you special treatment at the world’s other Mari Vannas: Washington, New York, London, Moscow and the flagship in St. Petersburg.

Aside from their keen understanding of L.A.’s penchant for concocting exclusory puzzles, the folks behind Mari Vanna restaurant cleverly placed a renowned Russian eatery in a town full of well-heeled Muscovites, other Slavic ex-pats and a wealth of foodies who always seek out exotic bites. Ginza Project is off to a good start, its bases covered.

Not since the closing of the august Russian gem Diaghilev in the old Wyndham Bel Age in 2008 have we had the Old World Tsar power that pairs well with good vodka and caviar. Sure, you could make the drive to the Valley for a night at swanky Romanov, but let’s not be ridiculous. 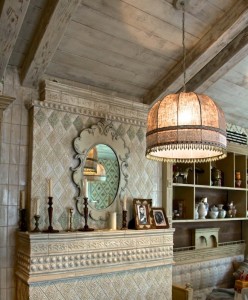 Nestled on quaint Melrose Place in the space once occupied by the acclaimed Bastide, Mari Vanna’s babushka cottage beckons like a fable from the Brothers Grimm.

Entering through a courtyard shaded by olive trees and thickets of willow, I walk up the porch steps and into the dining room — a folksy parlor complete with dangling chandeliers, stuffed armchairs, knotted rugs and peeled wallpaper. Lining the walls are antique cupboards stuffed with tchotchkes.

It’s the proverbial grandma’s house except for the incongruous Russian pop music blaring from an overhead speaker, music that would compel said grandma to clap her hands over her ears and start cursing like Nikita Khrushchev. I pine for the summer night beyond the window and relocate to the bucolic patio. Here the music continues, but it’s quieter and wafts harmlessly into the treetops. This will be the only misstep in an evening that will soon be transporting and memorable.

There are 17 infused vodkas on the menu and I begin the night with a flight of five of them: red pepper, horseradish, honey and oat, strawberry and sea berry. Sea berry is a Russian staple, its flavor profile similar to grapefruit. The sea berry vodka and I become well acquainted throughout the evening. I remain faithful to it only until I’m introduced to the crisp and alluring cucumber dill vodka that soon steals my heart, sparking a sordid love triangle.

Mari Vanna has a friendly and particularly gorgeous staff, from the hostesses to the busboys. My waiter Konstantin presents an amuse-bouche of yet more libations: a shot each of vodka and pickle juice to be consumed one after the other. It’s a dangerously good combination.

The black caviar ($115) arrives, widening my smile. And yes, the embargo on fishing for Caspian Sea sturgeon ended in 2010, so before me, cradled in a little glass bowl, are tender black pearls of true Osetra. Here, it is served modestly without accoutrement, save for tender, house-made blini and a little pot of sour cream. Absent is the bone spoon, nor is there a crystal chalice present or choir of angels to score the event. I feel slighted, but I had to respect Mari Vanna for keeping it real, treating caviar as the Russian staple that it is and not as some overblown pretense – regardless of its price.

Next to arrive was a bowl of crimson Svekolnik ($10), a chilled beet soup with crisp, julienned cucumber, potato and radish, topped with scallions and dill. The beet’s earthiness was tamed in the sweet, refreshing broth and the matchstick veggies added a satisfying crunch. Next, from the Hot Appetizers menu, came the Handmade Veal Pelmeni ($16) served in a handsome blue and white china crock. These delicate Russian dumplings were glistening with herbed butter and presented alongside a ramekin of sour cream. The Fish Plate ($18) from the Cold Appetizers menu featured house-cured salmon, cold-smoked paddlefish and house-smoked sturgeon, each distinctly flavored, the latter black, dry strips of Old World fishiness that your Midwestern grandfather would happily gobble down on the porch with a can of PBR.

The comfort food kept coming in the form of well-executed and reasonably priced entrees. The Slow Cooked Duck Leg ($21) is tender and juicy. It is served on a bed of sweet and sour stewed cabbage reminiscent of German rotkohl. The Beef Stroganoff ($26) features your own cast iron skillet cradling thinly sliced filet mignon in a light cream sauce , fresh thyme pickles and puree of potato, effectively snatching back this iconic dish from the gloved hand of Hamburger Helper and restoring its dignity and elegance.

I finish dinner and lean back in my wicker chair on the porch. The cottage is full now, alive with chatter and warm with light. Above the treetops, night is tinting the sky indigo. Long ago, as a Cold War kid, I regarded the Russian culture as cold, inscrutable and full of hardship. But as I muse, a trio of tambourine players erupt from inside, singing Happy Birthday in Russian to a patron beside me on the patio, and I suddenly can’t think of any place I’d rather be.