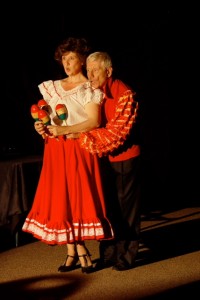 “Second Thoughts,” a comedy musical by Tony-nominated director Tony Tanner, opens at the West Hollywood City Council Chambers at 625 San Vicente Blvd. south of Santa Monica. The show, which features songs and skits that chart the fun involved in no longer being 21, is written and directed by Tanner, who has staged and choreographed five shows on Broadway and has been producing adaptations of classics in Plummer Park and other WeHo venues for many years. It will be the first musical revue staged at the Council Chambers. Second Thoughts features four veteran singer/actors: Angela DeCicco, Lloyd Pedersen, Bobbi Stamm and Tanner. They are accompanied by musical director David Kole on piano and Vera Budinoff playing violin. There will be four shows on July 13, 14, 20 and 21. Saturday shows are 7 p.m. and Sunday matinees are 2 p.m. Admission is free. More information online.

Just a reminder that this show is in the Council Chambers, even though it’s part of the “Free Theatre in the Parks” program of the City. It was an exciting first weekend, testing out the Chambers for a theatrical production! Good houses and two standing ovations later, the show is ready for its final weekend July 20/21. Come one, come all!