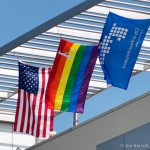 Gay Pride weekend has passed, and West Hollywood is ringing with the sounds of same-sex wedding bells. And where, some of you may ask, is that rainbow flag that was hanging from the roof of WeHo City Hall during Pride week? Relax folks. The disappearance isn’t tied to the acrimonious debates between local retailer and rainbow banner waver Larry Block and West Hollywood City Councilmember John Duran. Those broad stripes that were so gallantly streaming will indeed return. The City of West Hollywood, as a memorial to the 19 brave firefighters who died in Arizona Sunday, removed both the rainbow flag and the city flag. That is the equivalent, given the way the flags are displayed, to putting them at half mast in honor of the firefighters.