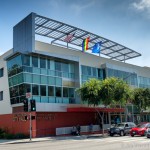 West Hollywood City Manager Paul Arevalo, in a memo to city employees, has announced a number of organizational and management changes that will take effect Monday.

Kristin Cook, who has served as Public Safety Manager for the past nine years, is being promoted to the new position of Public Safety Director. In this role she will continue to report to Arevalo. The Public Safety division oversees the city’s relationship with the Los Angeles County Sheriff’s Department, with which the city contracts for police services. It also coordinates community crime prevention programs.

Jeffrey Huffer, the city’s Economic Development Manager, is promoted to Strategic Initiatives Manager. In that position he will be responsible for developing, implementing and managing the city’s major capital projects and will coordinate with major private development projects. Huffer has played a leading role in implementation of the first phase of the city’s West Hollywood Park master plan, which included construction of the West Hollywood Library. He will report to Assistant City Manager Sam Baxter. In addition, the Economic Development and Special Projects division will be renamed the Economic Development division and will continue to house arts and cultural affairs.

Maribel Louie, assistant to the City Manager, also will assume the role of Acting Economic Development Manager. In his memo, Arevalo said she will oversee an assessment of the division’s programming to ensure the best positioning of the city’s future economic development work. She will continue to report to Arevalo.

Finally, Lisa Marie Belsanti has been named Acting Public Information Manager, a role she will hold in addition to her duties as Senior Management Analyst. In this role, Arevalo said, she will oversee an assessment of the division with a special emphasis on how the city can strengthen communications, social media and community engagement strategies. The recent retirement of Helen Goss, the long time Director of Public Information and Prosecution Services, led to a restructuring of that unit that was announced in May. Belsanti will report to Assistant City Manager Sam Baxter.

Arevalo positioned the changes as part of an effort by city government to improve efficiency in the light of the recession and the elimination of state redevelopment funds.

Arevalo announced another policy change designed to make City Hall services more available on the Fridays on which City Hall is closed. The decision to close City Hall every other Friday was made in 1991 as part of a South Coast Air Quality Management district effort to reduce emissions. Going forward, Arevalo said, individual city divisions and departments will reallocate staff hours to provide basic services needed by local residents.

Let me get this straight: The person who is LEAST helpful and approachable in City Hall is now its public face heading up all public relations? What a JOKE! Why does the city need a public relations team in the first place and how much does it cost US annually?? And I agree, someone should review all the salaries in City Hall because this is a position that pays well over $175,000! Especially when you consider that we are getting hosed everywhere else with increased fines, increased parking, etc.

It would be interesting to see the salaries of all these positions.