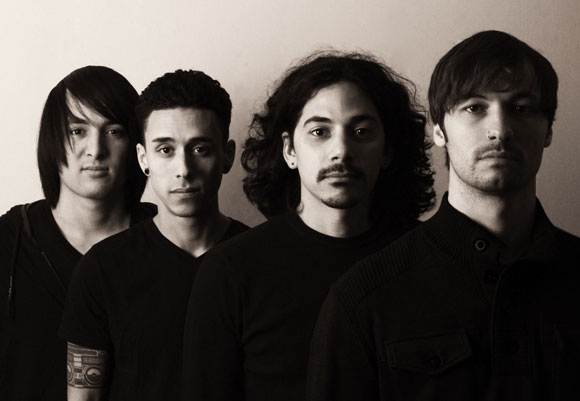 Beta State, a four-piece San Francisco band formed in 2009, has been working hard to break into mainstream success, playing for the likes of Linkin Park, The Strokes, Florence and the Machine, Young The Giant, Cage The Elephant and The Manchester Orchestra.

On Sunday, June 30, they open for Back Pocket Memory at The Roxy Theatre in West Hollywood.

The band cites influences such as 30 Seconds to Mars, Coldplay, Jimmy Eat World and Green Day. Beta State’s sound has been dubbed “Spaghetti Rock” due to the frantic style of strumming that makes the guitarist’s hands appear bent and warped. Pining, ballad-esque vocals bring the listener down during song verses, but the anthemic choruses are designed to combat teenage heartbreak.

Beta State is no stranger to fad television, previously featured on “Keeping Up With The Kardashians” and “MTV’s Road Rules.” Most recently, they penned a feature song for the new season of “Breaking Bad.”

Drummer Adrian Robison filled us in on the band’s newest single, Jesse “The Body” Ventura’s political run and why it’s so damn hard to break into L.A.’s music scene.

Question: Why are you a musician?

Answer: “I grew up in a musical household where my dad played bass and guitar and my mother played piano. I was banging on pots and pans when I was a kid. In middle school, I saw a band play in the quad and all of the girls were jocking the drummer. I wanted to play drums,” said Robison.

Q: What is your first memory of music growing up?

Q: Does your music have a message?

A: “Positivity. There is always going to be hope when things seem to be at their worst. We all incorporate that idea whenever we write lyrics because in our past projects, they were more negative, pessimistic.”

Q: What project were you in before Beta State?

A: I was in a band called Strata.

Q: How does the writing process work?

A: “On the first record, myself, our guitar player, Ryan [Hernandez], bassist, Justin [Kastner] would all get in a room and jam. We’d send like 15 instrumentals to our singer [Matt McDonald] who lives in Fresno, like three hours away. He’d come every few weeks and record [vocals] on top of them. With “#Friendship” it was more collaborative. Our singer was at practice every single day and we all wrote together.”

Q: What is the craziest thing you have seen since Beta formed?

A: “Opening for Green Day at Oracle Arena in our hometown was one. Getting a shout-out Tweet from Mike Shinoda of Linkin Park was another one. I realized how powerful social media was. I kind of felt like a celebrity for a day.”

Q: Which venues have the best audiences?

A: “Our best draws are in San Francisco. We always do really well at Bottom of the Hill. We play there July 5th. We’re actually from San Jose but there really is nowhere to play there except one venue that’s 21 and up it’s very small. L.A. has always been tough for us, for some reason, it’s a tough cookie to crack. Maybe we’re just playing at the wrong times or the wrong days. It’s a market that’s very saturated with so much entertainment.”

Q: How are you feeling about Sunday’s show?

A: “I’m really excited. We’ve been promoting it hard. A lot of people are coming out. We love playing The Roxy, it sounds the best. One of the best venues you can play in Hollywood.”

Q: Do you have any social or political opinions you would care to share?

A: “Everyone in the band is different. Our guitar player doesn’t even vote, at all. He’s opposed to any politics. I vote. I’m active, I read politics every day. I vote Obama. I’m not really into what he’s doing right now. For lack of a better term, he’s kind of a p—y. He doesn’t take control and make things happen. Congress is walking all over him. Maybe some things are out of his control but I feel like he needs to step it up. I don’t agree with him passing stricter gun laws. I’m not a member of the N.R.A. but I firmly believe in the Second Amendment. I’m really surprised the background check law didn’t pass. I feel like Washington’s broken. I’m looking forward to 2016. I really hope Jesse Ventura runs. He wants to eliminate the party system on the ballot. Names only, no party alliance.”

Q: What would you do if you weren’t a musician?

A: “I’d probably be a lot more successful and making a lot more money. My old band had a record deal and they spent like $3 million on us and I was dirt broke, I never made any money. Even if you’re selling out venues, you won’t be making the money you could  make with a regular job.”

A: “I hope I’m still involved with production. I really like helping other bands out, especially if they’re willing to listen. Not to say that I’m always right but I’ve learned over time that a lot of artists make the same mistakes. I really like mixing and helping other artists.

Q: How did you get involved with “Breaking Bad”?

A: “We’ve got a new video out for the single, ‘Start A Clean Slate.’ The whole band is into the show. One day I was dreaming of “Breaking Bad” and I woke up with the idea. The premise of the video is Beta State on tour with Heisenberg’s meth because in my old band we always joked about the Border Patrol and how we could have thousands of pounds of cocaine packed in our bass and guitar cabinets. No one would know. They would never stop us.”