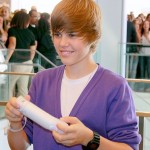 If it were Detroit, we’d be worried about drive by shootings. But in West Hollywood it’s crazy celebrities in expensive cars that you have to worry about. According to TMZ, Justin Bieber pinned a paparazzi with his Ferrari Monday night as he drove away from the Laugh Factory on Sunset Boulevard. The police absolved the B-Boy of blame, possibly because he had warned the photog out of the way before hitting him but also because he was a pedestrian in the road (in Los Angeles, cars always have the right of way!). Death by bullet or death by Ferrari? If it were a choice we had to make, we’d probably lay down in the B-Boy’s right of way.