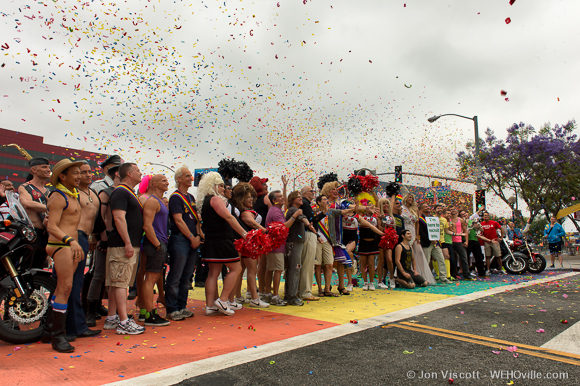 Two hours before the streets were fully abuzz with Pride parade-goers, about 40 West Hollywood officials and personalities huddled around Mayor Abbe Land as she cut a ribbon in dedication to the two multi-colored sidewalks at San Vicente and Santa Monica Boulevards. Among those joining council members John Duran, John D’Amico, John Heilman and Jeffrey Prang were the West Hollywood Cheerleaders, WeHo Dodgeball, Gay Men’s Chorus of Los Angeles and Maria Roman, who was the parade’s “Miss Queen of the Universe.”

A city photographer, high above the group on a ladder, also shot photos as confetti fell down behind them.

“We’re thrilled today,” said Land. “We dedicated them officially although they’ve been here awhile and they are in one of the most iconic intersections in West Hollywood at Santa Monica and San Vicente, which is the hub of our activism and I’m really glad that they’re there. They’re a beacon for people all over the world and they deserve to be in West Hollywood.”

The City Council approved painting the crosswalks one year ago for LA Pride 2012 and the month of June. The crosswalks, painted the rainbow colors of the LGBT flag, represent gay pride and LGBT rights.

Two months after the council first approved temporary rainbow crosswalks, it decided to make them permanent. Because the paint originally used to create the rainbows was not intended to be durable (in fact, the crosswalks were showing skids marks and fading at the end of their one-month run) the city re-graded the crosswalks and applied thermoplastic pavement markings to make them slip-resistent and easier to clean. The permanent crosswalks were installed in early October 2012.

“They’re about as clean as they’re going to get,” said Oscar Delgado, director of public works. “We programmatically do them monthly to keep them clean, but it doesn’t really look like it.

“Once a month they’ve been steam-cleaning the crosswalks. The problem is the hot water solution can’t be so hot, then they’re warranty issues with the finish.”

The event also launched the city’s community photo project “Show Us Your Pride.” 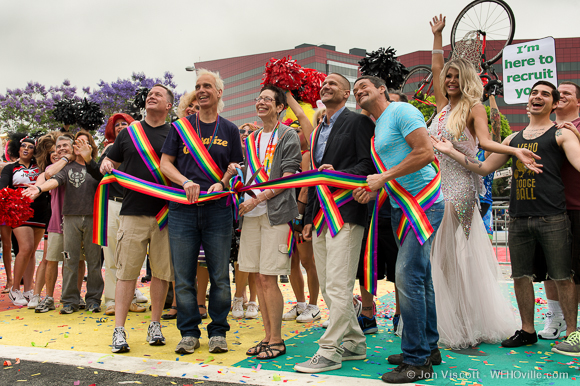 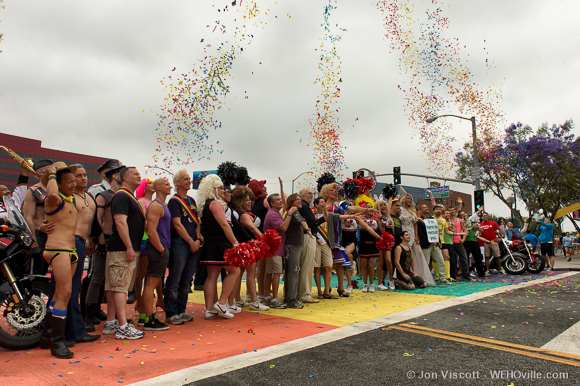 You’d think the $80,364 spent on these “stripes” could of been used for local city issues, like fixing the streets/sidewalks/homeless etc. I bet local artists could of & would of volunteered to do this for next to nothing & for the love of doing it. Guess the city likes to throw money into stripes that folks drive over and walk over, go figure.

I love and applaud our Crosswalks as they are an inspiration, representing the spirit of hope, tolerance and acceptance that defines Weho! I was there early that morning to cheer and yes, Larry Block, it was a fantastic day!

Jeff Prang voted against this because it cost the City $4,000.00. Confetti must be expensive. How about the fact that the crosswalks cannot be cleaned with hot water. Good idea, almost $90,000.00 of bad execution.

Well, MY ONLY complaint is, the guy in the jockstrap should have matching yellow socks!!!! LOL

The only criticism I have is that the photo attached to this article could have used some photo editing. I know I will be in the minority, but do we really need to see a guy in a jock strap in that pic? You couldn’t have edited it so Councilman Prang was at the far left? A little decorum wouldn’t hurt.

I think that is a great idea about the intersection, Larry! LBGT Square is perfect! I watched the parade last night online. Boy has it changed from back in the day. It is a grown up actual parade now. I remember back in 85 when I attended with some gay friends. It wasn’t much more than some flatbed trucks with half naked men dancing on them. It was pretty wild back in those days. But it was fun too. Now it is a full fledge parade. I am so proud of our town and our parade. I may not be… Read more »

What a fantastic day! The intersection of San Vicente and Santa Monica is iconic. Its where we all marched and the tv crews shot the footage across the globe.. lets dedicate the intersection a cultural landmank and rename it Historic Boystown Square – LBGT Square, and lets build West Hollywood to be the gay capital of the world..