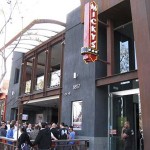 I’ve been reading all the comments about the story on WEHOville about Micky’s being sued by some of its employees. Most of those commenters argue that gay men should be able to have sex at gay bars. I’m a straight guy and I’ve had my share of adventures at stripper bars. But every time I’ve seen a guy touch a girl’s private parts he gets bounced on his a** out the door. So why should things be different for gay men in gay bars?

Let me start by making clear that I don’t know the truth about Micky’s. It’s not my kind of place. I prefer to hang in bars that look like they’ve been through a fire the night before I get — dark walls, a little dirt on the floor — think Mario Diaz’s famous Cock bar on Avenue A in New York City in the 1990s. Or Gold Coast in WeHo.

With all that out of the way, I too have been struck by those commenters who seem to equate freedom for gay men with the right to have sex, or close contact with another person’s sexual organs, in a public place. I’m guessing they are older gay guys who lived through a time when it was impossible to hold another man’s hand in public, or share a kiss. Sadly, in most of the United States that atmosphere is still the norm.

We’re fortunate in West Hollywood, where today it’s wonderfully acceptable for LGBT couples to express themselves romantically in public. Hold hands, give a kiss. No one cares, and many passersby smile in appreciation. (By the way, did I mention that I’m single?) And while it’s true that the core definition of homosexuality is sexual attraction to someone of the same gender, most of us gay guys and lesbians define our “queerness” more broadly. There is the sexual attraction, but there’s also the shared cultural interests and some degree of pride in our difference. For those commenters who are looking for sex, there are private venues in Los Angeles that don’t serve liquor and aren’t accessible to anyone stumbling in off the street, as are the gay bars in West Hollywood. GayCities.com lists 10 of them.

All these people that get “so offended” at “all these people” who want to touch them are just bragging about how attractive they are. Wait til they get older and NO ONE wants to touch them anymore, and then they will wish for the days when they whined about “soooooooo many people just want to touch me like I’m a piece of meat!”. The only thing worse than being sexually objectified is NOT being sexually objectified.

We have a double standard in our society… it just is. The majority of women find groping, fondling, etc. offensive so this keeps straight men in check… the women control those urges. If they were as overtly sexual and free in public as gay men are, they straight guys would have their hands all over women too. The majority of gay men welcome touching, fondling, genital or butt grabbing… it’s a sign of approval, interest and compliment. In any crowded gay bar you will find this same behavior going on among the patrons. So why then, when you have paid,… Read more »

I’ve never been to Micky’s so I don’t know what goes on there, but I do see a difference in male to male touching and male to female touching in a setting such as this. It comes down to the difference in physical strength. Most men can easily overpower most women, and the possible consequences could result in great injury to her that could include rape and pregnancy. There isn’t as big a difference in strength between men as there is between most men and most women, and a man is not likely to rape a male stripper. Also, a… Read more »

Personally, as having been a patron and a DJ where we had strippers regularly in a club, there is a line to be drawn, big tip or not. Patrons should be respectable to some extent. I can’t vouch for Mickey’s as I haven’t been there in a very long time but the bartenders were always affable and polite.

I suppose though when strippers from the circuit know you from having worked at other clubs makes a big difference to as there is no pressure to be anything other than social.

This is simple sociology… men are more sexual and so gay men touching other gay men is typically not offensive as it is for women. Each dancer should be free to set their own boundaries with management support. If they don’t want to be touched, (they won’t earn as much tips and that’s what they are there for) but if they have to keep fighting someone off than that becomes harrassment and management should step in and eject that patron or give them a stern warning. Notice I have never said anything about the ABC bureau, lewd conduct or any… Read more »

I have seen plenty of people walking around nude, and people touching, and pulling thier junk in public (as in “on the street”). Have you not heard of Mardi Gras? It’s called ‘Duress” and lot of people work under duress. I have been to Micky’s and I have seen what goes on, and The dancers have told patrons “no touching”. WOW! reverse gay discrimination, now that is news. IF the owners have allowed any discrimination or other law to be broken then they should be fined absolutely but, $15,000,000.00 worth, I don’t see the value. I would say $50,000.00 each… Read more »

Chloe, I singled you out only in the first sentence of my last post to clear up what appeared to be something you had not understood. I’m afraid that if I continue writing you will read even more into what I say that is incorrect.

Afraid. Rubbish- this is an open forum and you are not attacking me or anyone else. We are engaged in a back and forth but no reason to not continue. And if I misunderstood – I am sorry. This can happen and I appreciate your comments. At the very least you and anyone who reads this knows what doesn’t offend me. Never let anyone silence you – as long as it’s not ugly, nasty or vulgar – we can let the editors decide on what gets posted. And I can be quite snotty myself. Write on. It works for me.

Chloe, what I think of the employees who are involved in the lawsuit is covered in my last comment. Without speaking directly to the issues any more than I already have here, let me make a general observation; there are people who seem to live to be offended. They always have their shorts in a twist about something! Sadly, we have come to the place that no one has more credibility than someone who claims to be offended, and we bend over backwards to address their sensitivities. “The OFFENDED” has become a cottage industry. We have to stop this! We… Read more »

Darrell. Why do you single me out with this screed on being offended. Things that offend me are very basic. Bad manners, bad grammar, bad spelling, bad drivers, the GOP and lack of common sense. Things that DO NOT – LGBT/Trans humans who want the same rights as guaranteed by law. Foreign individuals. West Hollywood because I live here by choice. Reproductive choice, birth control, equal marriage, freedom to worship or not and the right to privacy, sex between consenting adults of any gender or combination, legalization of marijuana, Democrats, respect for others, pets; need I go on? Darrell –… Read more »

Darell, Weho never had an “edge”, we are not losing anything, we are melding into society, and it is not the gay ghetto it used to be. That is a good thing. I would say, Weho is growing up.

Why stop at Atlanta, DC and Toronto. And while on the subject – I know of at least three TOTALLY NUDE bars in LA including one in WeHo. For men! No, four.

Thank you Chloe, and I agree with you about closing off the interior to outside view.

Look at our community coming together!