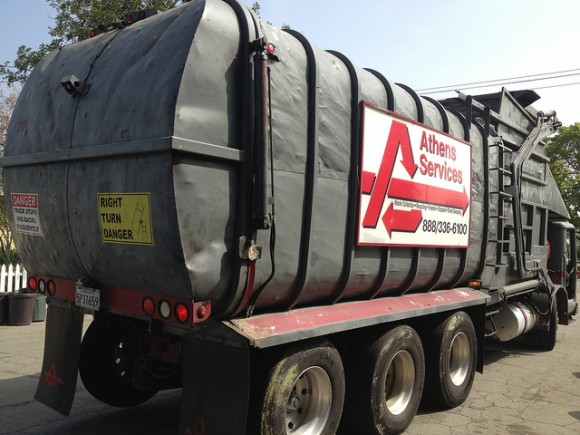 Almost a year after the West Hollywood City Council postponed voting on extending the city’s sanitation contract with Athens Services, the council voted 3-2 to hire a consulting firm to evaluate the merits of the Athens proposal at its Monday night meeting.

Despite calls from some council members to put the contract out to bid, which would likely draw a bid from Consolidated Disposal, the previous city trash vendor, the council instead voted to first evaluate four extension options from Athens, each varying in price and length of time.

Athens, which has been the city’s solid waste and recycling contractor since 2004, proposed adding services such as street sweeping, sidewalk cleaning and electronic/hazardous waste removal to its list of duties in exchange for extending its contract early and not putting it out for bid. Its current contract, for which the city pays $918,000 a year, expires in 2016. Athens hopes to extend its contract 15 years and have it automatically renewed each year.

In addition to the city’s payments, Athens charges apartment building owners fees set by the city for trash pickup, making West Hollywood a lucrative site for the company.

The council first debated the proposal at its July 16, 2012 meeting, but couldn’t reach consensus. Councilmembers John D’Amico and John Duran favored Athens’ proposal while Councilmembers Abbe Land and John Heilman wanted to get bids from other companies. During Duran’s 2013 council re-election campaign, Athens donated $10,000 to a special committee campaigning for Duran. Councilmember Jeffrey Prang abstained, saying it was too late in the evening (12:30 a.m.) for him to make a “thoughtful decision” on such an important matter.

Deadlocked, the council put off the debate.

At Monday’s meeting, Land and Heilman both wanted to see if the city could get a better deal by issuing a “request for proposals” (RFP) from other sanitation companies.

“If we’re going to spend $50,000 for a consultant to evaluate Athens’ proposals, we should be spending that money to compare and contrast it with other potential providers out there,” said Heilman.

Aaron Green, representing the Afriat Consulting Group, owned by Steve Afriat, who recently ran the successful reelection campaigns of Prang and Duran and has also done fundraising for Land and Heilman in past elections, urged the council to issue the RFP.

“We think that’s a pretty important piece of inherent analysis for the city to have at its disposal,” said Green. “I would like to ask that the council amend the scope to include analysis of what might be the benefits of going out to RFP and what the market might bear and what benefits the other competitors have to offer.”

In 2003, just before the city decided to use Athens, Afriat asked that the council members reconsider his client, Phoenix Waste and Recycling Services, whose owner, Rouben Kandilian, was the former owner of Zakaroff Services, the city’s trash pickup collector prior to Athens.

Duran and D’Amico said they think issuing an RFP is unnecessary and that the four Athens proposals should be evaluated first.

“I say we evaluate the four proposals and if none of them are acceptable, we have time before 2016 to go out for bid,” said D’Amico.

Prang, once again the deciding vote, joined Duran and D’Amico. Prang did not elaborate on why he voted with them.

R3 Consulting Group of Roseville, Calif. will return at an unspecified time in the future with the analysis of the Athens proposals.

Another bad move by the City Council. What a surprise that Afriat has something to do with it! HAHA. Of course, the smart move would be to get competing bids. But since when does our City Council make the smart move? I live in an apartment building in the back apartment, right above where the trash bins are. Athens is noisy and messy. I remember when we had the previous vendor, which was much quieter and much less messy.

Having dealt with the City’s ‘exclusive’ trash collector during my time as president of the board of a WeHo condo building, I don’t think the trash pickup is a bargain, I don’t think the service is particularly good, and I don’t think the company management is responsive to anyone but the Council.
If I have to hire you, and I have to pay you whatever you’ve decided to charge, and I can’t engage anyone else to provide the service, why would you do anything to please me??

Last I checked, it was a good idea to get at least two other bids to compare to the existing contract. And to get back to the produce analogy, you want to make sure that you are comparing apples to apples. The trash collection fee I currently pay through my property taxes is a relative bargain: $207.45/year for a single family home. I don’t know why they wouldn’t put out an RFP now so they can begin gathering more information about other potential vendors. I’d rather the Council spend money on corporate background checks than another consultant. Shouldn’t the City… Read more »

Ditto to Rudolf Martin. It could be possible that the whole Afriat thing is a set up so that Prang and Duran can say, “See? We don’t always vote in favor of Afriat’s clients.” Afriat probably planned the whole strategy.

You forgot to mention the upcharge the consultant realizes as a result of his highly educated opinions and the initial “get in the door” deposit he is paid for simply considering the lemon issue in the first place. When life gives you lemons – keep the lemons on ice and the onions stored in a cool dry place.

haha, oops: grocery shopping is complicated. i meant lemons not onions. and yes, you gotta squash some to make lemonade.

the city council goes shopping at the farmers market. they go to the vendor they know, who sells lemons at: 50c a lemon OR $1for3 lemons OR $3for10 lemons. instead of comparing what the other lemon vendors have to offer the council decides to pay a lemon consultant to tell them which deal is the best. the lemon consultant eventually gets back to them, that the more onions they buy, the better a deal they’d get but that they should be careful not to buy too many lemons. it wouldn’t make sense to look at the other vendors after already… Read more »