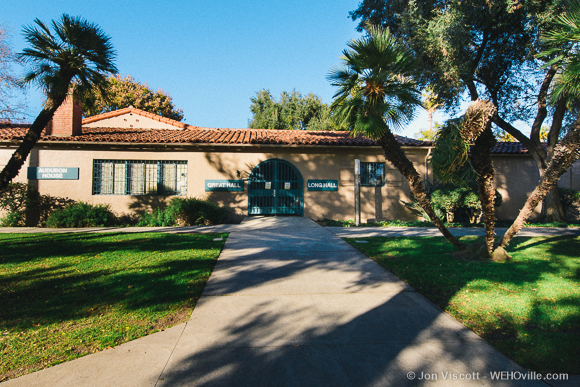 “This is a very exciting moment in recognizing our history,” said West Hollywood Preservation Alliance president Jen Dunbar, who wrote the nomination papers for the buildings. “I think this is something that the people of West Hollywood, the people of Los Angeles County and the state of California should be proud of.”

After hearing opposing arguments from West Hollywood Planning Manager John Keho and members of the West Hollywood Preservation Alliance, the nine-member commission went straight to vote without a discussion, closing the latest chapter in the ongoing battle over proposed renovations to Plummer Park.

The commission approved the nomination on the grounds the buildings are strong examples of Spanish Colonial revival architecture and because they were built by the Work Projects Administration (WPA), the Depression-era government-funded department that constructed many highways, parks and public buildings across the nation.

Jay Correia, a supervisor with the state’s Office of Historic Preservation, told the commission the Great Hall-Long Hall buildings still have a “high degree of integrity.”

The commission received 73 letters of support for the nomination and two different petitions supporting it (one with 90 signatures, the other with 61).

The approval comes despite opposition from West Hollywood. The City Council’s plan to renovate the park and demolish Great Hall-Long Hall stalled earlier this year when redevelopment funds were denied from the state. On April 1, the council voted 4-1 to oppose the Historic Register nomination.

It is highly unusual for a city to oppose a National Register nomination. Out of the roughly 50 state nominations made each year, only one will be opposed by a city, according to Correia.

Speaking briefly for the city, planning manager John Keho told the commission West Hollywood was committed to historic preservation but decided that additional green space in Plummer Park was a higher priority. Following the meeting, Keho declined to comment.

“I am elated,” said resident Stephanie Harker, who co-founded Protect Plummer Park, the group leading protests against renovation. “The commission did the proper thing for the buildings. It’s one step toward protecting all of Plummer Park.”

“It’s an incredible honor,” said resident Cathy Blaivas, the other founder of Protect Plummer Park. “It took an outside force to recognize what we have right now in the city. Thank goodness for the commission.”

The honor, however, does not guarantee protection from the wrecking ball. The City Council could still take a vote of “overriding consideration” to demolish the building.

At an April 1 meeting, Councilmember John Heilman called for their immediate demolition.

Because West Hollywood opposed the nomination, the commission automatically pulled the Great Hall-Long Hall nomination from its consent calendar and allowed both sides to make presentations.

Dunbar, who spent almost a year researching the history of the buildings to write her nomination papers, was one of five people who spoke in support of the nomination.

Dunbar said the Plummer Park Community Clubhouse (as the Great Hall-Long Hall buildings were originally known) was built with a sense of “pride” as it was intended to be the centerpiece for the park.

The Great Hall-Long Hall buildings were where organizational meetings were held in 1984 to incorporate the city.

It was also the place where the Los Angeles chapter of ACT UP (AIDS Coalition to Unleash Power) was formed and met weekly for 10 years from 1987-1996. ACT UP is an international advocacy group instrumental in pushing the United States government to act on the AIDS crisis and find effective treatment medication in the late 1980s and early 1990s.

Longtime ACT UP member Kevin Farrell took the day off from work to attend the meeting. Great Hall was the “perfect location” for the group’s meetings as West Hollywood was the epicenter of the AIDS epidemic in the 1980s, Farrell said.

“The building has earned a critical place in West Hollywood history and in LGBT history,” he said.

To make the designation official, the Keeper of the National Register of Historic Places in Washington D.C. must approve the addition of Great Hall-Long Hall to the list of approximately 80,000 places nationwide.

Despite the honor of the designation, it doesn’t automatically come with a plaque for the building.

“If the city wants to put a plaque on the building, they’ll have to approve it and pay for it,” said Correia.

The commission also approved the nomination of the Stahl House, the iconic “Case Study House #22” located in the Hollywood Hills above the Chateau Marmont. Built in 1960, the house became famous because of a photograph taken by Julius Shulman showing two women in flowing skirts sitting in the corner of the house with a panoramic view of LA through the floor-to-ceiling glass walls at night.

Designed by Pierre Koenig, the modernist-styled house was declared a Los Angeles Historic Cultural Monument in 1999.

seems to me that if these buildings can get the landmark status, then surely the Fickett library would have been able to as well, right? this is the building that the city demolished in the middle of the night under the guise of closing the street for, I think, a visit from Obama. this is great news but the work is not done. council can still opt to knock these buildings down and probably will because they like getting their way in these matters and damn what the residents want.

the majority of the city council’s obsession with demolishing these historic buildings and old growth trees seems to have no real rationale. blaming a historic building for the presence of transients around it insults our intelligence. the one architect on the council has rightly called out the ‘clear sight lines’ argument to be the canard that it is. the ‘creating open space’ square footage math still does not add up. ‘open space’ could easily be achieved by adding parking and re-shuffling the tennis courts on the north side. so what is the real reason for this relentless ‘war on plummer… Read more »

Mr. Martin has made many salient points. His characterization of the city’s position on the park as “The War on Plummer Park” sums up this ongoing battle in which City Hall looms as the agressor against this parcel of beauty and quiet, beloved by so many on the Eastside. And honored just this week with Historic Landmark status by not only the state but by the nation. Sadly the City does not have a non-aggressor position from which to advance itself. We can cite Tara, the El Mirador, The Fickett Library as just three of its targets. And Irv’s Burgers,… Read more »

Well, Bill – since it has been my pleasure and honor to have been an early member of Protect Plummer Park – let me clue you in. The buildings – which are 75 years old are not “badly in needs of renovation”. They do have restoration issues but they are sturdy and wonderful buildings. The fact that they were neglected, by the city, for about 20 years has not helped but they have stood firm. The architect who wrote the proposal spent considerable time and energy on the condition and structure of these the “halls”. They are very well preserved.… Read more »

Just because YOU don’t know anything about these buildings doesn’t mean “virtually no one. knows except a few residents”. More people know about these buildings than you think. These are WPA buildings, built long ago. Tower records is recent and the building no longer has any markings to designate it was once Tower Records. It is just a building now. It is not architecturally significant. It is not even culturally significant anymore.

I’m sorry, but I don’t get it. I’m all for historical preservation, but IMO this just seems a bit counter-productive. The buildings are badly in need of renovation, and even if renovated don’t serve the current needs of the park. On the other hand, what we really need is an anti-development grass-roots organization before West Hollywood becomes East Beverly Hills and there’s nothing left of the old city except a few bungalows east of Curson. But I just don’t understand how these buildings that virtually no one knows about except a few residents gets a historical designation but Tower Records… Read more »

Immediately – Huge thanks and praise for the PPP, Stephanie Harker, Cathy Blaivas who founded it and nurtured it and to the recently formed WHPA and Jen Dunbar who wrote the nomination proposal. To the people who schlepped to Anaheim, (including James Mills) to those who spoke and to everyone who truly believed in this long drawn out debate – gratitude for wanting to hang onto our very important history and for loyalty and perserverance. Woody is correct when he refers to the Republican mentality because this is truly about a revenue stream and little else. You have to wonder… Read more »

Hurrah for the designation and the hard work that went into getting it! Good work people!

I’m very glad to hear this. This City Council seems to have a very Republican mentality; they will have things their way, the people be damned. John Heilman’s snide attitude and arrogance are as disgusting as ever. He is the main reason that the Term Limits measure passed. In speaking with the community during the Term Limits Campaign, that seeemed to be the thread of commonality among those who supported the measure: Heilman has been around too long; he needs to go. If I heard it once, I heard it 2,000 times. He keeps proving their point. Remember “Tara”. I… Read more »

Congratulations to Jen Dunbar, the Founders of PPP and all who went to Anaheim to help fight for this Designation which is such an honor.