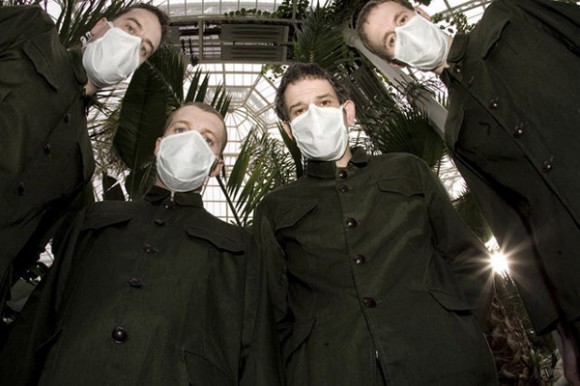 Clinic, a post-punk/noise rock group out of Liverpool, England, brings its vintage sound to the Troubadour on Wednesday night.

The band is noted for using non-conventional instruments, such as vintage keyboards, organs, harmoniums and the Philips Philicorda.

“We got into it just to be musicians and not for any other reason,” said frontman and founding member Ade Blackburn. “That’s always been the driving force behind it. Everyone in the band is still really enthusiastic.”

“We did Free Reign I as the original and Daniel Lopatin did some re-mixes of the songs that we released as Free Reign II,” said Blackburn. “The music lends itself to have different mixes.”

Clinic stopped in Texas and Arizona before heading to West Hollywood.

“The gigs have gone really well,” said Blackburn. “It’s been a few months since we’ve played live, but we’ve gotten back into the swing of it. We mix it up and play some songs off ‘Free Reign’ and older songs that we haven’t really done live for a long time. I think the audience appreciates that.”

The vintage instruments create a bit of a challenge when the group tours abroad.

“You’re almost asking for it, bringing along old vintage gear,” said Blackburn. “We’ve kind of reached a middle ground with it. We try and take as much as we can with us. It’s a large part of the character of the music. It makes it a lot more colorful.”

You may recognize their 2002 Grammy-nominated single “Walking With Thee.” As with many of Clinic’s songs, it has an understated melody and cryptic lyrics.

So what are the songs really about?

“A lot of it’s about escaping something, to free yourself, other times we use lyrics just for the sound and the rhythm, balancing between emotion and the surreal,” Blackburn said.

The band’s style has evolved over the years.

“To begin with, it was garage punk, like the 13th Floor Elevators and The Screamers,” said Blackburn. “Now it’s become slightly less punk and a bit spacier, a bit funkadelic. But there’s always going to be a sort of rawness to it.”

In the recording studio, Clinic first lays down tracks on analog tape.

“Usually we record the basics on tape, but we’re not severe purists,” Blackburn said. “We’ve edited and mixed digitally for the last few albums.”

“It adds a visual element to it,” said Blackburn. “It suits the music to have us all dressed the same while we ‘swap around’ with the instruments.”

Clinic last played the Troubadour in 2008.

“The Troubadour is a really good venue. It’s not too big,” said Blackburn. “It always seems like the people in the audience are fairly up for it and throw themselves around. It’s nothing fancy but always a really good night and atmosphere. Those (small)-sized venues really suit us the best.”