[dropcap]M[/dropcap]ax Katz, 30, a computer engineer living on the edge of West Hollywood, has never owned a car and has no plans to buy one. Katz is a walker.

“Imagine a drive where you’re always the only guy on the road,” Katz said, describing his walks. “It’s not terribly fast, but it’s quite comfortable. Every single day of the year I hear someone in this town complaining to me about traffic, idiot drivers, parking prices, tickets, car troubles, etcetera. I don’t have one drop of that stress in my life.”

Living at Sunset Boulevard and Laurel Avenue, Katz is only a few blocks from almost everything he needs — not unusual in a city of only 1.8 square miles.

Katz splits his work day between home and a shared work-space at Santa Monica Boulevard and Harper, which is only a 15-minute walk. For dinner, he might stop by Wa Sushi on La Cienega Boulevard, a hidden gem he says he’d never have known about if not for walking.

“New restaurant opened up on Sunset? I know. I’ve been there,” Katz said. “I was walking by one day and realized a new place opened up so I strolled right in, tried the special, spoke with the owner and took a date there the next week.”

When Katz needs groceries, he goes next door to Trader Joes on Sunset Boulevard, just outside the WeHo city limits, which hasn’t been affected by WeHo’s ban on plastic bags.

“The plastic bag ban hasn’t been much of a burden on me. I’ve merely refused to purchase groceries within West Hollywood since it was enacted,” he said.

He’ll often ask to have his groceries split between two or more bags for the walk, however. 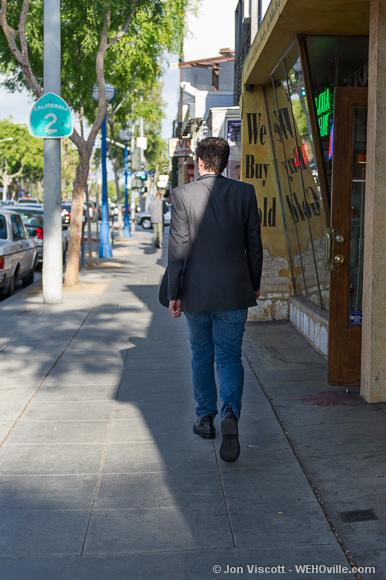 “If all or most of my groceries are in one bag, then that arm gets quite tired, and I feel lopsided for a while, which is annoying. First-world problems,” he said.

Both laundry and gym equipment are at his apartment, which is above a Wells Fargo bank and one of an increasing number of mixed-use projects in the WeHo area.

When Katz goes out on a Friday night, he walks. Chateau Marmont, Fubar, Gold Coast or Mother Lode are all close. Or he’ll trek to Santa Monica Boulevard and Wilcox Avenue for the Dragonfly. If he’s going somewhere far away, he’ll take a cab.

“This leads to some fun stuff — I can drink right up ’til last call if I so desire — and some not so fun stuff — ending up at a party 20 miles away and having to wait for half an hour for a cab to show up,” Katz said.

While most Angelenos can’t imagine life without a car, Katz swears they are missing out.

Tristan Schukraft, who works in the travel business as owner of ID90 Technologies, a 10-year-old company specializing in airline reservation and ticketing technology, is also a walker. Rising insurance and gas costs convinced him his car wasn’t necessary.

“I can walk to the gym, CVS, Pavilions, the bank, numerous restaurants and bars. Everywhere I need is within walking distance,” said Schukraft, a candidate in the March city council election who lives at the Hancock Lofts at Santa Monica Boulevard and Hancock. “The city has done great things to create that urban feel, thus creating walkability. If I want to go to the gym, I’m already warmed up when I get there.”

Schukraft grew up in Agoura and lived in the Valley for five years. He welcomes new mixed-use projects like Hancock Lofts that reduce the community’s reliance on cars and the city’s new “entertainment shuttle” that will take passengers from Doheny Drive to Fairfax Avenue on Friday and Saturday nights.

Schukraft haggles with some of his friends about their driving habits: Why would anyone come pick him up to drive around the block to go to lunch or a movie?

“I just don’t see the point.” Schukraft said with a laugh. “It’s ridiculous to think they would want me to drive around in circles with them, hunting for parking when I can walk there and be waiting for them.” 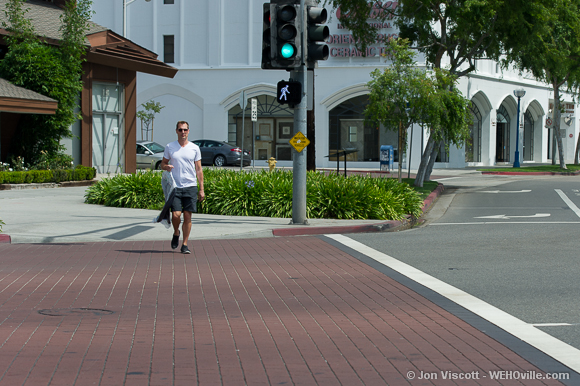 “Whenever I need to go to a doctor’s appointment or go to Target, I use Zipcar,” Schukraft said. “It’s so easy. The car is always right outside my building, and they are scattered around West Hollywood.”

“West Hollywood is the best city for a pedestrian because everything is so close you can walk to everything,” Schukraft said, “Best part about not having a car? No one asks you to drive them to the airport.”

West Hollywood’s pedestrian-friendly nature isn’t accidental. The city was designed so that most residents live within two blocks of a commercial shopping center. Most parking is behind the shops, which allows pedestrians easy access to stores from the street without much congestion.

“In the late 90s, we took over Santa Monica Boulevard,” said Keho. “We reorganized how the street was laid out. On the Westside, we widened the sidewalks to 24 feet wide in some areas. The narrowest are about 10 feet wide using a combination of grass and sidewalk.”

In 2011, the city completed the Sunset Strip Beautification Project, which rebuilt broken sidewalks, redesigned landscape for the medians, brought in new flowering trees and widened sidewalks.

The city also has banned drive-through restaurants since 1989. 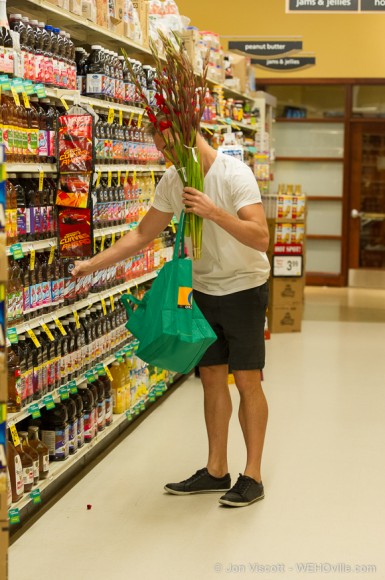 “When Fat Burger came to us, we wanted them in the city, but no drive-through would be allowed,” Keho said. “We have very diligently followed our city plan to not include any drive-throughs. They create huge congestion problems. We have created ways to reward those who are pedestrians and bicyclists.”

Currently, the city is working on a La Brea Avenue redesign that will bring the look of Santa Monica Boulevard to that Eastside gateway. Keho said the city plans call for more mixed-use projects that will bring more people onto WeHo’s streets.

“The more people you have on the street, the safer they are,” he said.

While some walk the city’s streets, others bike. Kevin Burton of the West Hollywood Bicycle Coalition, who gets around by bike, helped create the bicycle coalition, which has been working with the city to create more bike racks, smoothly paved streets and “sharrows,” shorthand for “shared lane marking.”

Burton has made several upgrades to his bike to make commuting and trips to the grocery store a smooth ride.

“I’m a local shopper,” said Burton. “I can do that because my bike has saddlebags, canvas bags with flaps that cover the contents. I can carry quite a lot.”

New sharrows lead to many places, including local shops Burton likes to frequent.

“Now that the sharrows are there, I use the Sweetzer and Fountain routes because Sweezter allows me to get to Santa Monica much quicker, and to where the bike lanes continue further west,” he said.

Burton has a light on his helmet, and two flashers on the back of the bike and one on each side. The lights help motorists see him from all sides.

According to a study by the League of American Bikers and National Council of La Raza, the average cost of owning a bicycle is $308 a year. The U.S. Bureau of Labor Statistics says it costs $8,220 a year on average to own and operate a car. The average American spends more than 16 percent of his income on transportation

Burton said some people are afraid to ride a bicycle on a city street. He hopes the city will offer more classes to get residents from stick to spoke.

“The classes are for people who have biked before but are uncertain about doing it on a city street,” Burton said. “The instructors are highly trained. I think in the near future, it will be easier for people who are inclined to try it out. It will be easy for anyone to rent a bike to take from one place to the next.”

For biking beginners, Burton recommends first biking on residential streets with less traffic and attending the “Confident City Cycling” class (free, sponsored by the city and put on by Sustainable Streets.)

For Katz a key advantage of walking is getting to really know the city.

“A lot of people who do drive don’t realize that when you walk, you get to see each and every store along the way,” he said. “If you drive and see a place that looks interesting, you think about visiting next time you are in the neighborhood, but probably don’t.”

Need advice on navigating WeHo without a car? Visiting downtown LA? Getting to Hollywood? Click here.

I live near the Laurel Ave and Sunset Blvd location mentioned in this article. It is a uniquely excellent spot for walkability. You’re within three blocks of the following: Three grocery stores including Trader Joes, Whole Foods, and Bristol Farms. There’s a massive, 24-hour Rite close by. You can go to Crunch gym. There’s a Post Office, Fedex, and UPS location. Two movie theaters: the Sundance Sunset 5 or the DGA. There’s countless: restaurants, bars, nightclubs, dry cleaners, tailors, and masseuses. In order to avoid driving (I hate traffic), I’ve made an effort to use only uber-local businesses and it’s… Read more »

Before I purchased my home, I spent months going to various neighborhoods, parking my car and walking the streets – not just to look at the homes for sale and check out the neighborhoods, but to find the most walkable area. Like the people in the article, I can walk to nearly anything I need or want – Koontz, banks, gym, restaurants, bars, groceries, post office, etc. West Hollywood is an awesome walking town — far more so than most other areas of LA. That said, I love cars, own two, and still drive often as I have other things… Read more »

oh my stars, yes, the city should have classes on how to ride a bicycle, and how to walk. ideally, cars would be banned and we would never have to leave West Hollywood. It could be a magical land of strolling and cycling, free from worry or evil commerce.
after reading this story and looking at the pictures, i may quit my job, sell my car, and walk around carrying flowers,admiring the trees and spend my day smiling at people.