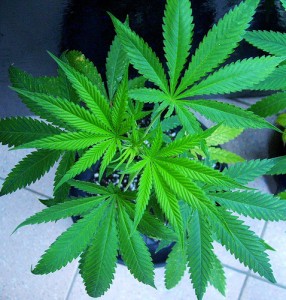 The former owner of a West Hollywood medical marijuana dispensary pleaded not guilty today to 16 felonies, including attempted murder and arson, stemming from what authorities said was a long-running dispute with his one-time landlord.

Andrew Harrison Kramer, 38, is charged with six counts of attempted murder, three counts of arson of an inhabited structure and one count each of stalking, assault with a deadly weapon, assault by means likely to produce great bodily injury, first-degree burglary, attempt to burn, arson of a structure or forest and use of a destructive device/explosive to injure or destroy.

A preliminary hearing is scheduled for May 2. Kramer formerly owned the Sunset Super Shop in West Hollywood and had an ongoing dispute with the building owners. At some point, the landlords bought out the shop and Kramer worked for them as a manager, according to the District Attorney’s Office.

Kramer now stands accused of trying to murder his one-time landlords, George and Nancee Lanning, and other members of their family. The criminal complaint alleges the crimes occurred between July 2008 and April 2012 and included an assault on Nancee with a crowbar.

Kramer and four co-defendants were arraigned in Dept. 30 of Los Angeles Superior Court and all five pleaded not guilty on all counts.

The four co-defendants are:

— Ronald Samuel, 40, who is charged with two counts of attempted murder and one count each of assault with a deadly weapon, assault by means likely to produce great bodily injury and first-degree burglary;

— Rene Johnson, 50, who is charged with two counts of attempted murder and one count each of attempt to burn, arson of an inhabited structure, arson of a structure or forest and use of a destructive device/explosive to injure or destroy;

— Grace Cox, 49, who is charged with one count each of arson of a structure or forest and use of a destructive device/explosive to injure or destroy; and

— Jonathan Livingston, 43, who is charged with one count of arson of an inhabited structure.

The Beverly Hills Police Department said the five men were suspected members of an organized criminal enterprise under investigation for four years.

“This organization was involved in the operation of multiple retail marijuana dispensaries generating massive profits, repeatedly showing their willingness to use violence and intimidation to expand their operations and dissuade competition,” Beverly Hills police Lt. Lincoln Hoshino stated.

Eleven search warrants — including four for dispensaries in Hollywood, West Hollywood and Marina del Rey — were executed in connection with the arrests of the suspects on Tuesday, according to Honshino. Whether Kramer had an ownership interest in those dispensaries was not immediately clear.

Hoshino said the group hired gang members as enforcers, and law enforcement officers seized millions of dollars during their investigation.