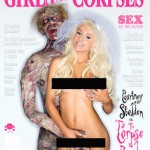 We think West Hollywood’s city council members overlooked a much hipper option when they crowned Rihanna as the Queen of West Hollywood last Halloween. That would be Courtney Stodden, who raised a ruckus when the Abbey revoked her invitation last fall to do a pole dance. Rather than give up on WeHo, the 18-year-old reality TV star and budding chanteuse got a gig in January at Eleven, where she premiered her music video “Reality.” WeHo Confidential recognized her local celebrity by giving her its “New Hollywood Starlet” award at a ceremony at Robertson Lounge attended by Mayor Jeffrey Prang and Councilmember John Duran.

Now Courtney, obviously believing that any publicity is good publicity (so long as they spell your name right), is pushing Rihanna off the home page of TMZ.com and other gossip sites with news of her appearance on the cover of Girls and Corpses magazine. E! Online reports that Stodden tweeted her appearance in Girls and Corpses to her followers, sending them a link where they could buy the magazine. Girls and Corpses, for those of you who can’t find it at Book Soup, describes itself as “sort of like Maxim Magazine meets Dawn Of The Dead. There are pictures in each issue of beautiful, scantily clad young beauties posing with hideous, decaying, festering corpses.” Stodden, who was turned down for a shoot by Playboy, told E she agreed to the Girls and Corpses cover because “Girls and Corpses is a silly, yet sexy magazine, which fits my personality perfectly. That’s why I did it.”

Next Halloween, we’re hoping the City Council journeys to Hollywood Forever cemetery to crown Courtney Stodden as Queen of West Hollywood. Until then, we’re going to think of her as WeHo’s own Princess Die.