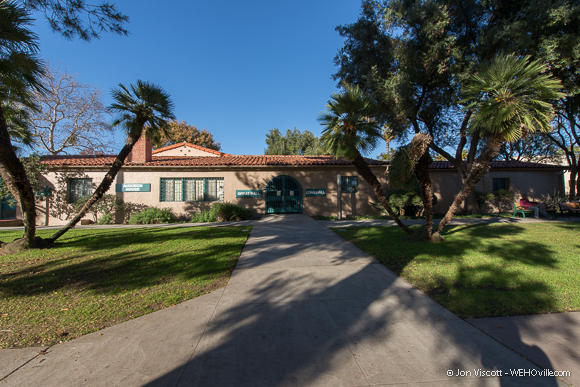 West Hollywood Councilmember John Heilman called for the immediate demolition of Plummer Park’s Great Hall-Long Hall at Monday night’s City Council meeting as the council voted to oppose the nomination of the buildings to the National Register of Historic Places.

“I think we should authorize to do what should have been authorized previously which is to authorize them to be demolished forthwith,” said Heilman. “Allowing these decrepit buildings to remain there … is not in the best interests of the community.”

While not disputing the historic aspects of the buildings, council members voted 4-1 to oppose the nomination, saying they want maximum flexibility as they decide how to renovate the park. The city’s current plan calls for the buildings to be demolished.

The state Historical Resources Commission is scheduled to vote on that nomination at its May 1 meeting in Anaheim.

“I don’t want to take the option off the table to remove the buildings,” said Councilmember Abbe Land.

Resident Stephanie Harker, who spearheaded the Protect Plummer Park movement, was shocked by the council’s comments.

“I can’t believe that four of the five council members will demolish the WPA structures, Great Hall-Long Hall, even if they receive historic designation from the state of California and are placed on the National Registry of Historic Places,” said Harker. “But that is what they stated flat out. Their reason? They do not like the buildings. It is truly an outrage.”

Under a plan approved by the City Council in 2011, Great Hall-Long Hall would have been razed as part of a $41 million makeover of the park. The city planned to dig a 179-space underground parking garage in the center portion of the park, forcing the demolition of the buildings along with the nearby Tiny Tots pre-school building.

Construction on that project was to begin in February 2012, but public outcry forced the city to delay those plans. Since that initial delay, funding for the park makeover has also come into question.

Built in 1935 by the Depression-era Work Projects Administration (WPA), the Spanish Colonial Revival-style buildings were originally called the Plummer Park Community Clubhouse. Great Hall-Long Hall are the only WPA buildings in the city, and two of just a few WPA buildings in Los Angeles County.

“[Great Hall-Long Hall] are significant buildings with history,” said long-time WeHo resident Jeanne Dobrin. “It would be criminal to take them down.”

Councilmember John D’Amico, who cast the dissenting vote, said the buildings deserve a thorough review by the state.

“We should allow the state to tell us what we have,” said D’Amico.

D’Amico noted the city had a similar situation when it wanted to build low-income housing on the grounds of Tara, the city owned estate at 1343 Laurel Avenue. That plan for Tara was ultimately voted down.

Mayor Jeffrey Prang said the most historic thing the city could do is restore the open space of the park where Great Hall-Long Hall sit.

“The buildings take up a great deal of space that could be used for a playground for children,” said Prang. “They could be used as a place for seniors to sit under the trees and play cards or for somebody to play sports or just a place for someone to sit in the sun.”

Even if the Historic Resources Commission does approve the nomination, which it seems poised to do, the city could still demolish the buildings by making a vote of “overriding consideration.”

In a related matter, the council voted to support State Assembly Bill 981, authored by Richard Bloom, who was elected in November to represent the state’s 50th assembly district, which includes West Hollywood.

Bloom’s bill would allow cities to use bonds taken out in 2011 for redevelopment projects. The use of those bonds came into question with the state-mandated dissolution of the redevelopment agencies.

In March 2011, West Hollywood took out a $30 million bond to pay for part of the $41 million Plummer Park makeover. While none of that money has been used, the city is repaying it at an 8 percent interest rate. Under the terms of the bonds, they cannot be voided for 10 years.

City Manager Paul Arevalo said the resolution is just a procedural first step and the bill has a long way to go before the state legislature approves it.

Riley has it right: Jeffrey Prang while running for re-election in his interview with Wehoville: ” As mayor and council member, I have been the leading advocate for historic preservation and restrained development in our residential neighborhoods. (…) Things change and some redevelopment of residential buildings is necessary, but protecting and preserving culturally significant buildings while maintaining the character of our neighborhoods must be a priority.” Jeffrey Prang at last week’s City Council meeting referring to Great Hall Long Hall: “The buildings take up a great deal of space that could be used for a playground for children” The interview… Read more »

Words of wisdom and logic. Thanks RM

seems like most of the council people just want to knock down history and build parking lots. underground garages, robo garages, library garages.

The CC does seem almost obsessed with parking. Structures, meters, lots, underground and robo. Yet there are so many things the city could do to not only increase well-being and cut crime with money they fritter away on their parking fixation. John Heilman either has a short memory, early onset memory losses, or just lies. How to tell and what to do? My worse fear is “they” will demolish these buildings under cover of darkness and before May 1st and then there will be no WPA halls to get in their way. That is my worst fear and I believe… Read more »

Posted on our STPFS page: In 2007 the National Trust of Historic Preservation selected West Hollywood as one of America’s Dozen Distinctive Destinations. The City of West Hollywood was the only city in California to receive this prestigious designation that year. In a posting on West Hollywood’s own website then Mayor John Heilman is quoted as stating; “The City of West Hollywood is honored to be selected as one of the 2007 Dozen Distinctive Destinations,” – Mayor John Heilman. In the same article Mr. Heilman is also quoted as saying, We have a strong commitment to protecting the City’s character… Read more »

Chloe, Riley and Sal, agree with all your comments. The apartments on Vista are of the same vintage as the Long Hall and have been given special designation. Correctly stated, the Hall has not been maintained or.properly supervised. The beautiful outdoor fireplace long ago cemented over is a travesty….. Loved that the City of Glendale and Disney have seen our light. Our Long Hall can’t get respect in it’s own town!

Mayor Prang quote from an article here on wehoville.com: January 2013
PROTECTING AND PRESERVING CULTURALLY SIGNIFIICANT BUILDINGS WHILE MAINTAINING THE CHARACTER OF OUR NEIGHBORHOODS MUST BE A PRIORITY. Severe Flip-Flop before and after the campaign in which he was re-elected. And in this article we learn…”Even if the Historic Resources Commission does approve the nomination, which it seems poised to do, the city could still demolish the buildings …” So, which statement is the truth?

And this from Curbed LA: The City of Glendale and the Walk Disney company understand adaptive reuse and restoration of a historic building. They’ve also agreed to nominate the building to the National Register of Historic Places. WeHo’s city council should wake up and take notice!
http://la.curbed.com/archives/2013/04/disney_making_over_terminal_at_las_first_commercial_airport.php

What happened in West Hollywood Monday night was small town politics at it worst. And even if you voted to re-elect the incumbents this past March you have to agree that the language and tantrum displayed during open session of a city council meeting was at best a bad Peyton Place movie. History in West Hollywood proves that these elected officials could care less about historic preservation. And you want to know why? Because it makes a lousy buck. There isn’t enough return on their investment. This is about money. Not about what the community wants. They had their lunch… Read more »

You are so right, Isa. The city could easily get rid of the gambling and the transient element in Plummer Park. If it was in happening in WeHo Park they’d be damn sure they got rid of it in a hurry. Plummer is such a beautiful, historic park that should be preserved. Those buildings ARE historic and could be utilized for a Spanish American Historical Museum. The city and the planning commission keeps approving big square boxes and call them “magnificent.” No, taste and no style. They are building the future tear-downs. They have a vision that is NOT the… Read more »

Thx you Rudolf and Larry. This bldg reflects the design and influence of the origins of the area. Señor Plummers house is now in Calabasas. I spent many years in the park playing Karams in the Plummer House. Watching movies & playing ping pong on Saturdays in the Long Hall. Roller skating in the Rose Garden Area. Picking berries in the park & playing in the hugh calderons on the perimeter of the park. It’s like there is an effort to remove all Spanish influence for current modern and Eastern European cultural influence. Gambling is illegal is this being supervised?

Isa – we do have many Russians in the park and the modern designs proposed are atrocious – but no one one with any sense wants anything to change the design or feeling of the park. The folks who want to protect and preserve the park want it just as it is. I am sure the old men do gamble – but that is really not the point. I reckon most folks gamble at sport one way or another – this is the least of the problem. The real problem is the threat to the part. It should remain just… Read more »

Sadly Rudolf – we were made April Fools Monday by ever thinking the city would leave Plummer Park alone. John D’Amico spoke for the park and its supporters but your point about Heilman and the decrepitude of the buildings is absolutely right. If anything in the park was left to decay (and those buildings are by no means decayed) it was Mr. Heilman who has been glued to his seat for the duration doing what ever he thought was good for him. Usually something to do with parking. His comments on Monday were outrageous and more people need to say… Read more »

Look at the bright side…Mr Heilman is not going to get re-elected.