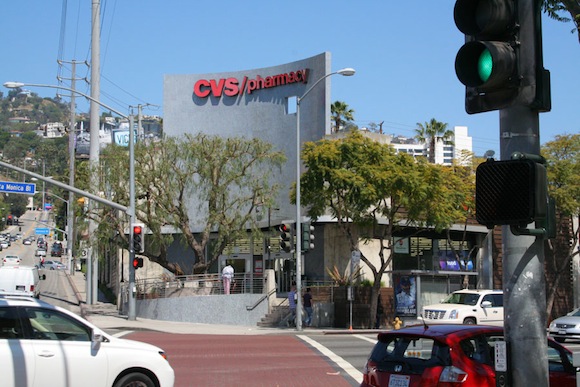 Ever look at the CVS that sits at the corner of La Cienega and Santa Monica boulevards? Ever wonder, why does that not look like any CVS I’ve seen before?

It is a strange building: highly stylized concrete stairs (which scream 80s), heavy wood siding, over-scaled asymmetrical steel frames, semicircle front … it clearly was not originally designed to be an oversized drug store.

Back in the 1940s, this corner was home to the La Cienega Lanes bowling alley, the first in a number of businesses to occupy the long-spanning bow-truss structure, each representative of their time. 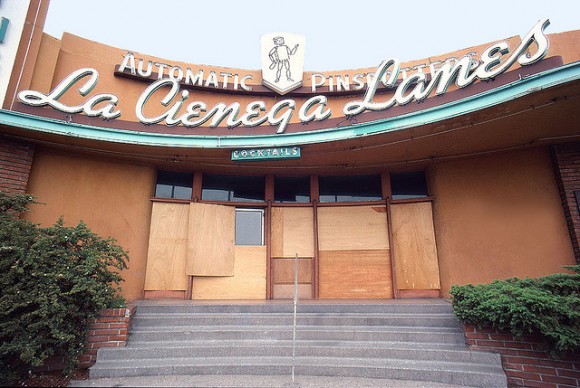 La Cienega Lanes lived during a popular time for bowling, when the LA Times even had a regular bowling column.

The lanes survived into the 1970s, but bowling began to lose its popularity.

Adapting with the times, the building transformed into the next hottest thing: a late-70s roller disco.

The rink was started by Denny Cordell, a successful record producer who had worked with the Moody Blues, Joe Cocker and Tom Petty and who, after his foray as owner of a skating rink, would go on to produce albums for the Cranberries, among others. Adding to its cultural cachet was the rumor that Cher, a rollerskating fanatic, was at one time an owner of Flippers and, along with Olivia Newton-John, a regular.

The days of roller disco eventually ran their course, and the building again changed hands. In 1983, Esprit, a quickly growing, socially forward fashion label, turned the space into one of its first freestanding U.S. stores.

Esprit spent $14 million on renovations, hiring hot 80s designer Joseph D’Urso to create the concrete parking structure, wood siding and store. The remnants of an Esprit sign (with its trademark vertical-less E) are still visible on the side of CVS today.

In the 1990s Esprit had its sights on international markets and looked to sell the building. In 1995, the company entered into negotiations with the City of West Hollywood, which considered transforming the store into a new City Council chambers and a replacement library, both of which were housed in West Hollywood Park at the time. This deal, however, fell through.

A string of drug stores eventually moved into the space, which, with its wide open floor plan, was perfect for the banal big box stores that pepper our cities today.

Perhaps one day a new (and more fun) cultural trend will take over the space.

But for now, whenever I am out to pick up a prescription or paper towels, I will imagine Cher skating by — Hell on wheels, let’s roll!

The bowling alley was owned by Art Linkletter, who would become a TV personality in the ’60s best known for his show, “Kids Say the Darnedest Things.” He was also in the headlines in 1969 when his daughter Diane died after jumping or falling from an upstairs apartment at Shoreham Towers apartment building a few blocks away, at Shoreham and Horn. It was rumored she had taken LSD prior to the incident.

Esprit was in the movie LA Story with Steve Martin, I believe this is where he met Sarah Jessica Parker

If I remember correctly, the building turned into a Sav-On around 1997 or 1998. But the wood siding didn’t actually show up until the early 2000s, when Sav-On was acquired by CVS. I wish I knew why there was that square hole in the sign.

I roller skated – drunk and badly at Flippers. It was fun and for me – dangerous. Esprit made a splash there and was great for shopping. CVS – eh. Not cool. I would not quite call it architecture.