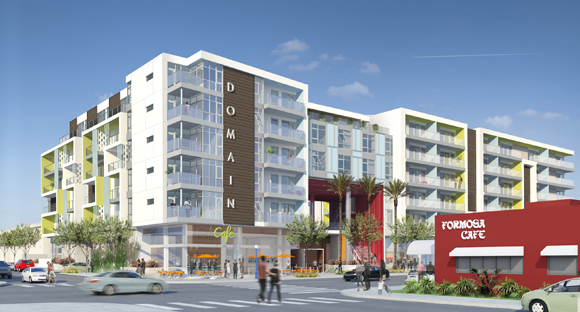 The West Hollywood Planning Commission’s design review subcommittee gave a largely positive assessment Thursday of plans for a six-story residential and retail building to be built on the site of the Faith Plating plant on Santa Monica Boulevard at North Formosa Avenue.

The project, which will go by the name “Domain,” includes 166 residential units (including 33 affordable housing) and 9,300 square feet of retail space at street level. It will be built by the San Juan Capistrano-based Walbern Developments. The building will be six stories high (72 feet) on the Santa Monica Boulevard side, but only three stories (36 feet) at the back of the lot, where the area is residential.

Architect Alan Pullman of the Long Beach-based Studio One Eleven firm said the centerpiece of the project will be a three-story portal allowing views of the Hollywood sign in the background. That portal will have a bright red metal covering designed to tie into the red-painted Formosa Cafe, the Chinese restaurant directly across the street famous as a former hangout of Hollywood stars. The portal will also feature a staircase leading to a public seating area on the second level of the building. Behind a gate there will be a courtyard with a swimming pool for residents.

Commissioner John Altschul called the project “magnificent” and “gorgeous,” while Commissioner Roy Huebner said that it “will sit nicely on the site.”

Altschul questioned the size of the project. But, noting the two six-story Monarch Group retail/apartment projects going up nearby, the first at the old Carl’s Jr. restaurant site on the northwest corner of Santa Monica Boulevard and La Brea Avenue, and the second at the old Jon’s Market site (a longtime favorite of the Russian community living on the Eastside that closed its doors in May 2011 on the southeast corner of La Brea and Fountain Avenue), and a proposed seven-story Movietown Plaza project (on Santa Monica Boulevard at Poinsettia Place), he said it would likely fit in.

“It’s big,” said Altschul. “But the whole neighborhood is getting big.”

Walbern Developments will be required to remove toxic waste from the so-called brownfield site, whose soil is contaminated by the heavy metals used by the 95-year-old Faith Plating Co., which is the world’s largest replater of chrome automobile bumpers.

In 2005, the Hanover Company planned to develop the site, but the economic downturn forced it to abandon the project. Architect Pullman said his company took those original designs and improved upon them.

Eastside resident Steve Levin, one of two people speaking during a public comment period, said the new designs were “even better now.”

Levin said he is relieved that the site will now be cleaned up. He said he fears every day the potential health risks to residents living near the contaminated lot.

Walbern officials said the designs will likely be tweaked based on the feedback they received. The project is expected to go before the Planning Commission later this spring.