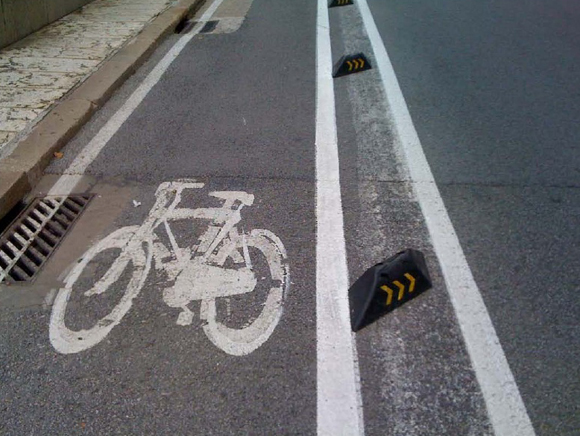 West Hollywood bicycle advocates have sounded the alarm on the redesign of La Brea Avenue, which they say may not leave room for future bike lanes.

The project’s civil engineer, however, says “not so fast.”

The current plan for the redesign, which includes new street trees, pedestrian lighting, landscaping and, most controversially, medians, is meant to bring the look and feel of Santa Monica Boulevard to WeHo’s stretch of La Brea between Romaine Street and Fountain Avenue.

While the plan does not include bike lanes, it is supposed to accommodate their construction in the future.

“The city might be about to make a very dangerous mistake with the redesign of La Brea Avenue,” said Matt Baume, a member of the WeHo Bicycle Coalition. “It looks like (bike lanes) may no longer be the plan: earlier this month, they released a report that indicates they’re opting instead to build a wide median.”

The report that Baume cites is the “initial study and negative declaration,” which is an analysis of the project’s potential environmental effects, and includes the latest plans. They do call for landscaped medians. The report was authored a month ago by city civil engineer Donn Uyeno, who has since received 57 written comments, almost all of them expressing concern from the bike community.

In the initial study, Uyeno writes “The project looked into incorporating dedicated bike lanes into the project, however the public right of way and the geometry of the street did not allow for it.”

Uyeno has since said he will amend that portion of the study, believing bike lanes can and should be incorporated at a future date, and after consideration of the feedback he has received from bike advocates — but medians still remain part of the project.

Many advocates worry the medians will not leave room for bike lanes unless street parking is later removed. That’s unlikely in an area starved for parking, they say.

Baume says the solution is easy: eliminate the medians.

“Rather than creating a choice between bike lanes and parking, the city could simply make room for both by eliminating the giant median they have planned. Why won’t they? Well, that’s anyone’s guess,” he said.

Uyeno said the project is being funded by a grant from the Los Angeles County Metropolitan Transportation Authority, and that medians were a part of the grant application.

Also, the point of the streetscape is to match the look on La Brea with the one already on Santa Monica Boulevard, which includes island medians, he said.

“Their width is pretty narrow,” Uyeno said. “They are not humungous giant medians, even the landscaping is similar to what’s on Santa Monica Boulevard. Even if you took out all the medians, the bike lane that would go on La Brea would look the same,” he said.

In 1999, the city adopted the “Santa Monica Boulevard Master Plan,” which intended to create a “main street” that would “connect and unify West Hollywood from its eastern boundary at La Brea Avenue to its western boundary at Doheny Drive, with distinctive gateways at both ends.”

In 2001, initial construction of this “main street” was completed on SMB, including widened sidewalks, street trees in parkways, pedestrian street lights and landscaped medians.

While Uyeno remains optimistic bike lanes will be included in future plans, he does admit “removing some of the parking would probably be the best way to get a nice (bike lane) project.”

“Residents and businesses will be highly resistant to the removal of parking,” Baume said.

“It’s not unheard of for the city to remove parking spaces,” Uyeno countered.

Furthermore, the City of Los Angeles has plans to build bike lanes along its portion of La Brea, which bookends WeHo’s section of the street to the north and south. WeHo bike advocates insist the city should match that plan and that it’d be unsafe to do anything else, such as previously proposed stenciled “sharrows.”

The bicycle coalition cites a number of city documents that state the city is committed to connecting bike lanes with its neighbors.

For example, a portion of the 2011 City of West Hollywood Climate Action Plan reads, “the City will coordinate with the City of Los Angeles and City of Beverly Hills to connect West Hollywood bike routes to existing and planned routes in these cities.”

The 2011 West Hollywood General Plan says the city will “identify areas where better bicycle route connections can be implemented and increase bicycle parking can be provided.”

And finally, in its Nov. 2011 report to city staff making recommendations regarding the La Brea Streetscape, the West Hollywood Bicycle Task Force called for a class 2 bike lane — class 2 is federal jargon meaning a lane set aside in city streets exclusively for bikes.

“We can still do our landscaping portion and copy what the City of LA is doing in the future,” said Uyeno. “In my head, that’s pretty much what’s going to happen.”

The City Council will likely take up the issue at its March 18 meeting, according to Uyeno.

Good lord Chloe, all it takes to understand the markings in the street is Google. I found the answer for you (I already knew what they meant). I could have just told you, but that would be too easy. http://en.wikipedia.org/wiki/Shared_lane_marking.

I bet only a small minority didn’t know what those symbols mean.

Oh, and please stop calling the east side “Blighted”. I don’t care why you do it, just please stop. We are not blighted, no matter what the City Council says.

Well, Snarkygal – I learned something I didn’t know and I probably should have said I didn’t know why they were in the middle of the street – and now I do so thank you. Nonetheless the point of my comments was pro-bicyclists and observing how hard it is to explain to rude bicyclists that there are rules for riding and they exist for a reason. I learned this very early on and I was reminded by a friend who was in the 1984 Olympics as a competitor at the bicycling event. Thank you though for informing me of what… Read more »

I would like to add that the “center of the lane” bike symbols are totally misleading. Does this mean bikes may be ridden in the middle of the street between cars or that bikes are NOW allowed on Fountain (and other streets) or that cars must yield to bike riders or that these are very wide bike lanes and not for cars or what? My thought is that these moves by the city – in general – are poorly thought out and serve no one well. (No rails on library, CC Chambers dark and still needing acoustical tweaks, residential mixed… Read more »

I got my first bike at 8 years old. I rode it everywhere and when I got older I got a 3 speed and rode it EVERYWHERE. Living in Cambridge later I grew to love bike travel – it was very welcome in Cambridge and it was even part of NYC. Here is my problem with bikes. Real bicyclists ride with rules of the road. They have they acknowledged they are vehicles and must stop at stoplights and signal. Bravo.. But this is a small group compared to the maniacs who ride anywhere they like. Sidewalks, crosswalks, – no signals,… Read more »

In the big picture view of this, if we’re serious about bike lanes then more then a 3 foot wide painted section is needed. Current bike lanes all over the city are useless. Rarely are they used and when groups of bikes are together they take over the whole lane anyways with no regard to the bike lanes. If we’re serious then remove a lane of traffic on every major street. For most of us, this is the only way to safely ride a bike in this city. Since we know that this isn’t going to happen, a better job… Read more »

If there is an intention of putting bike lanes on a street at some point in the future, and they’re doing a complete redesign of the street, then what justification is there for *not* including the bike lanes right now? Rather than modify the street twice, just do it once! Or if the reason is that they are opposed to the bike lanes, then just say so, rather than making a street modification that looks like it is intended to take road space away from cyclists and give it to no one (in the medians).

once again I am stunned by our failure to initiate a comprehensive traffic plan in WeHo that would include bike lanes and local public transportation as well as a vision how to address the rapidly increasing urban density we are soon expecting. right now the plan is to address every intersection separately and hope for the best. good luck to us all!

Who cares about bike lanes? Most of them don’t use them and just cut through traffic like a holes, cutting cars off etc. Most wound enjoy the nice medians not stupid bike lanes used by a tranny.

The plans clearly allow for the eventual creation of bike lanes, but to create bike lanes on a 3 block stretch of La Brea NOW will create a much more dangerous situation for bikers and drivers. If and when Los Angeles every addresses bike lanes on La Brea, we’ll be in a position to add our own–but I wouldn’t hold my breath for that. In the meantime, we are sick of the east side looking like it does. Thousands of new Weho residents will soon make the east side their home. This will dramatically shift the power at City Hall… Read more »

Regardless of whether we get bike lanes or not, it won’t stop cyclists from riding down the avenue. I am one of them. For avid cyclists or people who really want to use their bikes to travel locally to work it is easier to certainly have them. If the city was smart, but then whoever said anyone running the City of LA had much foresight, it would immediately implement steps to zone them into current and future city planning. It might even forced drivers to wake up from their daily car pool fog and pay attention to the road for… Read more »

The future is now concerning bike lanes. With all the construction going up along La Brea if the city does not create safe zones for bicycle travel, short distance shoppers and commuters will be forced into cars. Creating worse traffic congestion, air quality and noise pollution then we already have in our neighborhood. Bike lanes smooth the flow and slow the excessive speed of cars making our streets safer for everyone.

bike lanes should be between the sidewalk and parked cars like many parts of the world…..a much safer alternative too, as bikes wouldn’t have to compete with moving vehicles

It’s true that the bike lanes in WeHo are under-utilized, but that’s because they hardly go anywhere. The small stretch on part of Santa Monica Blvd is nice, but hardly enough to get many people out of their cars and onto bikes. When other cities (like LA, Long Beach, and Santa Monica) connect their bike lanes to major destinations, they see a huge increase in ridership. And along with that increase comes more economic activity at businesses (cyclists spend more per month on average than car-drivers), less congestion, better parking availability, and safer streets. Everybody wins. The alternative, of course,… Read more »