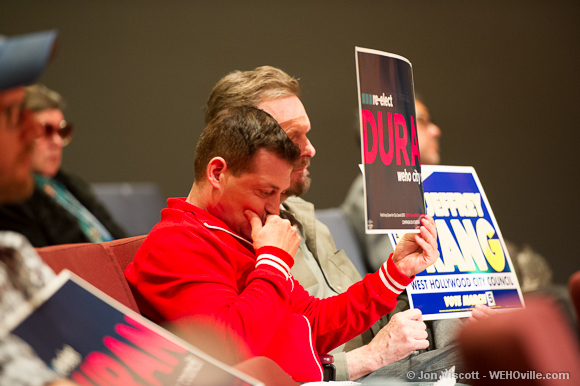 The allegations and anger that have characterized this year’s election for two seats on the West Hollywood City council flared at the council meeting Monday in a confrontation between challenger Steve Martin and supporters of incumbents Jeffrey Prang and John Duran. 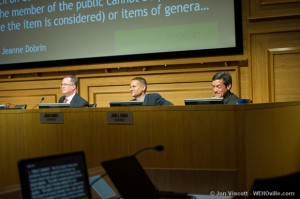 When Martin came to the podium to speak, about eight supporters of Duran and Prang, seated in the front two rows of the audience, held campaign signs high above their heads, blocking the view of the people behind them. Many in the audience yelled out “Rude!”

The signs were lowered after Prang banged the gavel and told the audience to respect the speakers. Martin called their action “fascist” and told Duran, who has focused his re-election campaign against Martin, to “send your dogs out.”

During the public comment period of the meeting, Vince Roncone, who is employed by the Duran re-election team, said Martin had been rude calling them “dogs” and that they are “human beings.”

Well over an hour of the 90-minute meeting was consumed by public commenters explaining why they were supporting or opposing Measure C, a proposal on today’s ballot that would limit council members in the future to three four-year terms, or voting for a particular candidate.

“Yes on Measure C” campaign manager Scott Schmidt, also speaking during the public comment period, said that, regardless of the election’s outcome, it is clear by the thousands who signed the petition to get term limits on the ballot that residents want change. Term limits supporters garnered 3,454 signatures from local residents on a petition forcing the City Council to put the measure on today’s ballot.

“They believe that we can do better as a city than we are doing now,” said Schmidt, who also called on the council to create an ethics commission.

Another speaker, West Hollywood resident Chris Tucker, said term limits are not needed because the city is running in an orderly fashion.

“Why should we take that away?” said Tucker. “We’re a well-oiled machine. Why would you stop operations?”

Another contentious moment came when Erik Barker, an at-large appointee to the Business License Commission, said he felt pressured when Duran emailed him asking for his endorsement for the election. As a result, Barker said he felt compelled to resign from the commission. He said that there should be a new way of selecting city commissioners rather than a “pay for play, quid-pro-quo situation.”

While Duran did not address Barker’s accusations at Monday’s meeting, he dismissed similar concerns raised at the Jan. 17, 2012 council meeting. At that meeting, during a discussion on election reforms, several other commission and board members said they’d also felt pressured to endorse incumbents they didn’t believe in. Duran said that asking for endorsements is just part of the political process and that people can always say no. At that same meeting, Councilmember John D’Amico pointed out board or commission members might fear for their political future too much to say no. D’Amico, in fact, sparked controversy when he removed Lauren Meister from the city Planning Commission, saying he had promised the position to attorney John Altschul in exchange for Altschul’s support of D’Amico’s council campaign.

Finally, Larry Block who six weeks ago stood before the council unsuccessfully trying to get Councilmember John Heilman to shake D’Amico’s hand, returned for another round.

This time, Block said that Heilman’s refusal to shake D’Amico’s hand was an “intimidation” and that it made Heilman “look like a sissy and our council look weak.”

Block went on to criticize Duran and Prang for failing to broker peace between Heilman and D’Amico.

“You two big boys running for re-election can’t negotiate a handshake between your 10-year-plus colleague and the new councilmember?” Block asked.

Get real Woody. Just what we need in West Hollywood. A statue of every nobody. I myself am anxiously awaiting the AIDS Memorial.

Larry Block Rocks! His actions will resonate long after the empty rhetoric has subsided. Larry is now an historic West Hollywood figure & we should build a statue in his honor in West Hollywood Park, next to the one we should build in honor of Scott Schmidt. Thanks to them, this election is the most historic since West Hollywood became a city in 1984 & we owe them a deep debt of gratitude. Power to the people.

Wow, thanks for the comment. My mother said to me just two weeks ago.. your such a shy boy.. I guess you grew out of it. But its so easy to speak up when it comes from your heart. Measure C was my baby but the credit goes to all the volunteers and the people who collected signatures and wrote the language. I have never been as proud of my city, our community and the smarts of our voters. Measure C got more votes than a popular mayor or any candidate. Measure C wins with about 12k raised against much… Read more »

Block should have run, he’s the only one who speaks the truth with courage

I was so intimidated, I voted for Prang and Duran!!!

The hysterical man in the red sweater was an embarrassment to what is supposed to be a respectable & dignified chance for the public to speak their mind & state their cause in 2 minutes. He & his cohorts held up signs & chanted in an attempt to prevent a speaker from being seen or heard. If anyone had done that to him, you can bet he would have lashed out at them. In his emotional state, this man declared that he was supporting Prang “for mayor” & Duran “for City Council. “Duh? Not surprising, they were Duran supporters, the… Read more »

frightening intimidation tacticts. my grandfather was a Lutheran minister in Germany and during his services the Nazi party sent out their goons to hold up signs to intimidate him. ironically 20 years later the Communist party used the same tactic when he was preaching in East Germany.

Wow- still no handshake- are they in kindergarten? Heilman needs to go!