This week, the two top-ranked teams faced off in a battle for dominance on the dodgeball court at the West Hollywood Park recreation center.

Dodgeball for Dummies (D4D) and Tuesday Night Lights have been the frontrunners in the Tuesday night league, but there can be only one top team.

The usual playful dancing and cat calls between the teams quickly evaporated as the match got under way.

D4D showed up in new uniforms, and took an early lead. But Tuesday Night Lights came back before the half. Despite having just one final member on the court, they pulled out a victory.

After the teams switched sides, the tides turned as D4D’s Noah R-S was the last man standing.

He knocked out a number of competitors, but was ultimately too out-numbered and D4D took another win.

The rest of the match was a shutout. D4D won the final matches and brought home a 7-2 victory.

All final scores are below:

Heathers 10, Rise of the Unicorns 0

Boobie Warriors 4, It Gets Butter 3 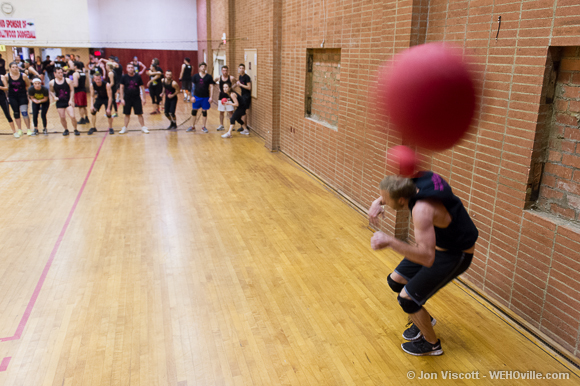 I was only able to shoot one match that night. Don’t worry we will have plenty more coverage in the weeks to come.

I love that you cover weho dodgeball!

Thank you so much for covering WeHo Dodgeball!! You rock!!