Change is needed in City Hall. That was the theme Wednesday evening at a debate largely focused on development issues among candidates for two seats on the West Hollywood City Council. 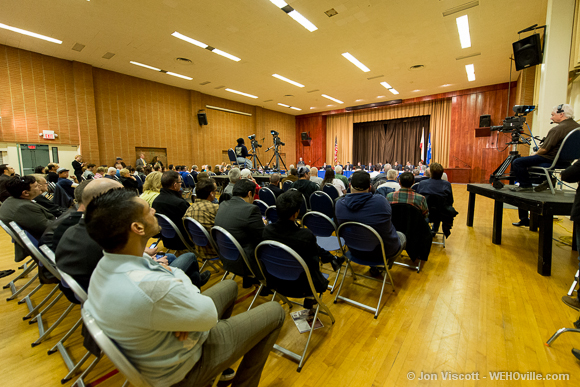 In a predominantly civil manner, the seven challengers went after the two incumbents, who remained calm and composed, during the debate at the West Hollywood Park Auditorium, next to the public library. Topics included development, traffic, public safety, housing and the city’s Eastside. About 250 people attended the debate put on by a group of West Hollywood neighborhood associations. Hundreds more watched it on TV.

Challenger Sam Borelli kicked off the debate off by saying the most important issue facing the city is “bringing back trust in government, trust in leadership and trust in the [governmental] process.” Borelli, a public relations consultant, has raised more than $20,000 in campaign donations, putting him second among the nine candidates in the March 5 election. 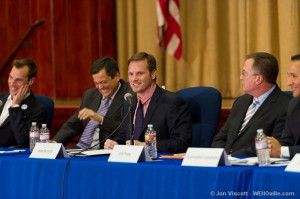 As did other challengers, he decried the influence of real estate developers on local government. Challenger Tom DeMille accused the incumbents of “prostitution for campaign donations” from developers. Campaign donation reports filed to date show real estate interests accounting for 43 percent of all donations, with 85 percent of their money directed to incumbent Councilmember John Duran and 15 percent to Mayor Jeffrey Prang.

Challenger Steve Martin, a lawyer who served on the council from 1994-2003, also focused on development issues. He said that large projects approved by the current council, such as the redevelopment of Movietown Plaza on Santa Monica Boulevard on the city’s Eastside, would add to traffic problems. He also questioned the rationale for the council’s agreement to reduce the parking space requirements at the proposed Sunset Millennium and Marriott Edition hotel projects. Challenger Nick Garzilli, whose business is transportation technology, advocated the city dedicate itself to a privately funded system of solar powered transportation pods that would run on tracks above the streets. Garzilli managed to work the transportation pods into his answer to virtually every question posed during the debate, eventually sparking laughter in the audience.

Martin also attacked the “development agreements,” in which City Hall approves development projects with special conditions, saying they are a “bane” and an “invitation for corruption” in that they allow City Hall and developers to circumvents the city’s general plan.

Martin and Christopher Landavazo, a Los Angeles Sheriff’s Department deputy who is in the council race, also questioned lobbyist Steve Afriat’s role in city politics. They noted that he is a top land-use lobbyist for real estate interests, including the Pacific Design Center, and also serves as the campaign manager for both Duran and Prang. Martin said Duran and Prang were “in bed and knocked up” with Afriat. Borelli and Martin were joined by challenger Tristan Schukraft, a technology entrepreneur, in questioning whether City Council members and administrators were really unaware of a proposal, recently revealed by WEHOville, for Pacific Design Center owner Charles Cohen to develop the MTA bus yard lot on Santa Monica Boulevard in the heart of the city’s Boystown. That proposal has sparked fierce criticism from council members and residents, who say it will cause traffic congestion.

Borelli bemoaned what he called the gentrification of West Hollywood, saying young people are priced out of the rental market. Schukraft suggested approving construction of 250-square-foot “micro-unit” apartments as a solution to high rents.

Borelli said the City Council’s recent creation of a new Eastside Task Force was tantamount to admitting it has neglected the Eastside of West Hollywood.

Mayor Prang, while saying he regretted voting to approve the controversial $41 million Plummer Park redesign, which has since been shelved due to public outcry, defended the council’s development decisions. Both he and Duran noted they had co-authored a 2008 ordinance that curtailed destruction of rent-control apartment buildings to help preserve neighborhoods and retain residents who might have been priced out of the luxury condominiums that usually replace aging buildings. Prang and Duran defended special “development agreements,” saying they are never approved unless they provide a genuine public benefit. Duran said that development agreements are rarely used, while Prang said he would work to restrain their use and tighten conditions for approval.

Prang disputed Borelli’s contention that the City Council has ignored the Eastside, saying it has spent more on redevelopment and improvements there than on the Westside. Prang called the Eastside a success story, noting that prostitution and drug use are down. Duran said the Eastside is not blighted and that it has many beautiful neighborhoods.

Responding to complaints that real estate development has caused traffic problems in West Hollywood, Duran said pass-through traffic causes most of the congestion. He mentioned the opposing needs of speeding up traffic to help get people through the city quickly and slowing down traffic for public safety concerns.

In other matters, Borelli criticized City Hall for failing to implement a nighttime shuttle to take residents to Boystown and the Sunset Strip. Landavazo said better signage directing drivers to the city’s parking structures is needed.

The issue of public safety was raised by several challengers, with Landavazo advocating having deputies walk a beat to get to know the community better. Challenger Rusty Wiggs asked for more foot patrols and an increased sheriff’s budget. Challenger Tom DeMille pushed for better lighting on residential streets and increased bike patrols by deputies. Martin also suggested more law enforcement in residential areas. In perhaps the most surprising proposal by a candidate running for office in a famously liberal city, Garzilli advocated “conceal carry groups,” essentially citizens authorized to carry concealed guns, to improve public safety.

Prang and Duran both said the city is incredibly safe, Duran pointing out the sheriff’s response time is significantly better than that of the Los Angeles Police Department.

For more scenes from the debate, see below: 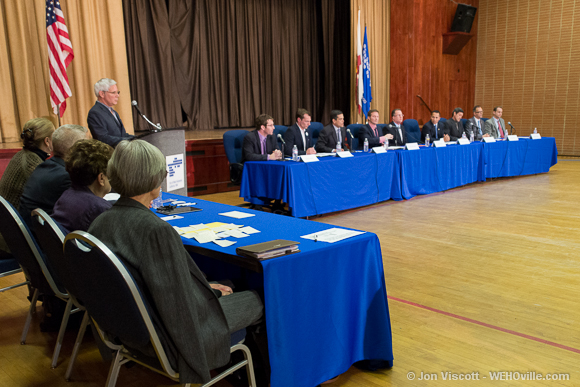 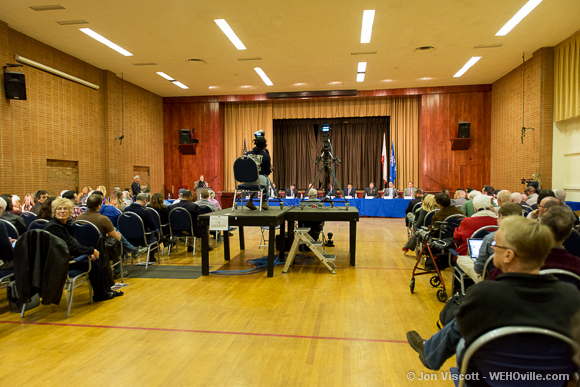 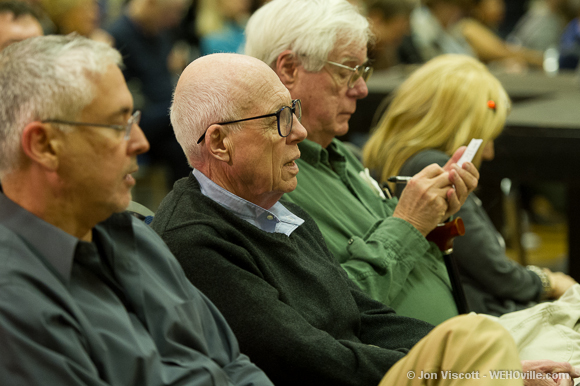 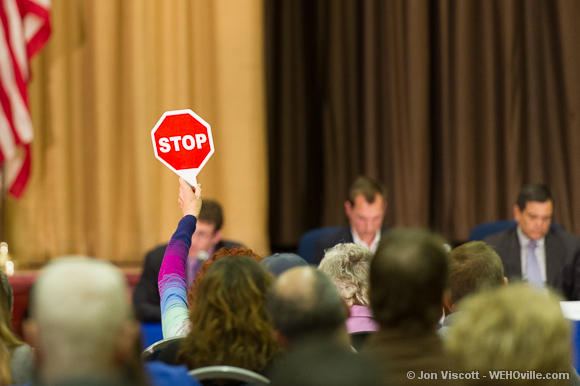 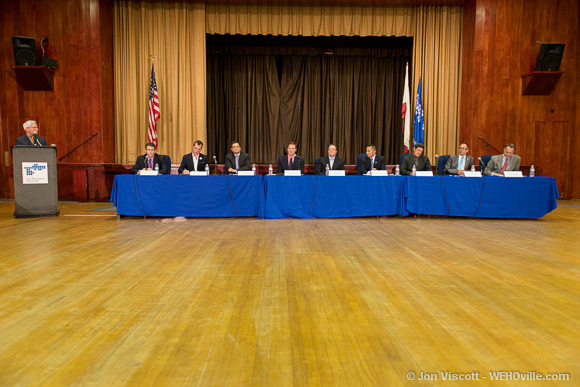 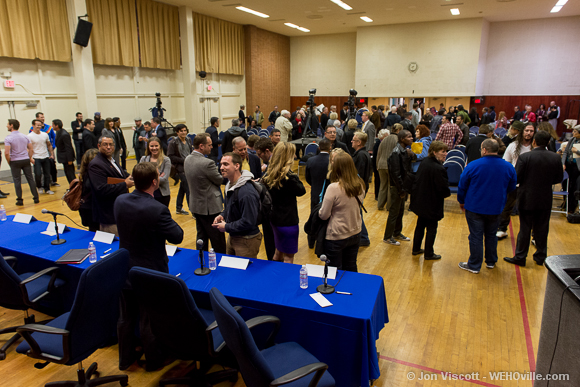 Sheesh, talk about a tirade….you just delivered a big one

I was disappointed by the lack of vision and big ideas presented by either the challengers that seemed to rely on petty talking points or the incumbents whom were listless and bored with the proceedings. Nick Garzilli: I commend Nick for trying to be innovative by having a platform based on technology and transportation, his “one trick pony” strategy was embarrassing and not effective. He also made a full of himself suggesting that WeHo have a “conceal and carry” vigilante group roam the streets even though this liberal city has strict anti-gun laws. He is obviously out of touch with… Read more »

Sam Borelli is a man for our time. Even if we pass Measure C on Term Limits – the “old timers” that are in there now (some with 7 terms under their belt – 21 years!) they’ll get to start as if it was their first Term. WE need to still vote them out of office. Even if they’ve done some good – we need new blood. We need fresh ideas and representation for all the city. Not people who have learned to use it as their own tool or vehicle.

@Jen I’m with you on both counts. It would be nice to aim big with the kind of transportation ideas put forth by Nick Garzilli. I also have believed for years that the crime statistics are deliberately under-counted. I can’t tell you how many times police, fire and ambulances rush though the streets yet when you check the published crime events for any given day, nothing appears.

Great debate. Love Nick Garzilli’s innovative transportation ideas – modern ideas for a modern city. As for public safety I question the stats put forward by the incumbents. In my condo building sheriffs have been called three times in the past several months, twice regarding burglary in progress, and once for an assault in progress. They never showed, hence no police report. Lack of police reports skews the statistics.

THE DEBATE WAS AT THE AUDITORIUM, NOT THE LIBRARY.

Wish I’d been able to watch this on TV. Unfortunately, like most City Council meetings, the broadcast was riddled with tiling and pixelation rendering any viewing the live broadcast impossible. I thought this was just a problem with the cameras in the new Council chambers, but it was even worse with the broadcast from the old auditorium.

There is nothing wrong with my TV or my Time Warner HD-DVR box. I only have this problem if I try to watch a live broadcast on channel 10. I really wanted to watch, but thanks to the technical problems, I couldn’t.

Steve Martin and Sam Borelli really did a great job tonight and they both have my vote!!!! It’s very clear, that Prang and Duran must be sent a’packin!!! Guys, perhaps one of yur developer friends will hire you….although, ha, without a council position, yur utterly useless to them now….bye, bye now

…..and poor Nick and his pods….really dude???….weren’t you aware that you were the laughing stock all night?