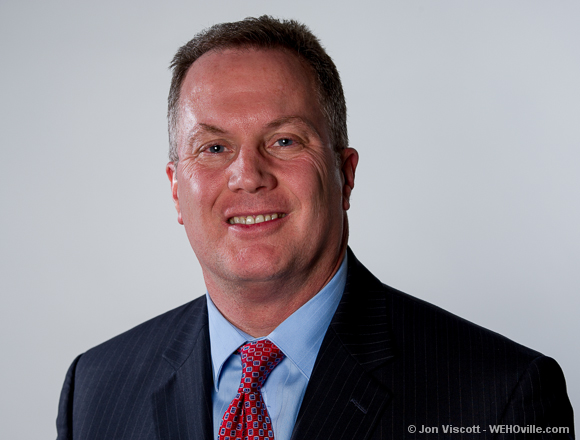 A native of the blue-collar town of Warren, Mich., a suburb of Detroit, Jeff Prang has been involved in politics since he was a teenager. “I was chair of the Young Democrats in Michigan. I ran for city council at age 19,” said Prang, 50. “I love politics.”

He’s called West Hollywood home since 1987, moving here because it was an easier place to be a gay man. Prang quickly got involved with local political groups and has served on the city council since 1997. Employed as a special assistant in the LA County assessor’s office, Prang has been in a domestic partnership with Ray Vizcarra since 2004, married since 2008. The two met while Prang was working in the city’s booth at gay pride 2003.

Answer: West Hollywood can preserve its culturally and historically significant structure while still providing opportunities for new construction and building upgrades. As mayor and council member, I have been the leading advocate for historic preservation and restrained development in our residential neighborhoods. I was co-author to the development moratorium that stopped the wholesale destruction of affordable rental buildings and put new restrictions on overdevelopment. I also authored the city’s historic preservation survey that inventoried those buildings that are currently, or that had future potential, to be historically significant.

Things change and some redevelopment of residential buildings is necessary, but protecting and preserving culturally significant buildings while maintaining the character of our neighborhoods must be a priority.

Answer: West Hollywood is California’s third most densely populated city, with about 20,000 people per square mile and surpassed only by Maywood and Cudahy. Despite this fact, West Hollywood does maintain an “urban village” feel with many neighborhoods rich in their walk-ability features.

More housing development theoretically can help reduce the pressure of rising housing costs. However, to have even a measureable impact on rents and housing costs would require an enormous investment in new construction and the accompanying density. It would be difficult for our small city to impact housing costs in a meaningful manner without massive up-zoning.

Since I was first elected, the city has created nearly 2,000 new public parking spaces. However, parking congestion remains one of the most pressing infrastructure issues in the city. Parking shortages in residential neighborhoods as well as business districts remain a priority. Parking structures, while expensive, provide relief to parking and traffic congestion in our neighborhoods, and help our small businesses compete and thrive.

Answer: I oppose term limits. While it’s unlikely that this term limit measure will apply to me as I do not envision serving for another 12 years, terms limits are bad public policy. Term limits have been an unmitigated disaster everywhere they have been applied: Sacramento has been thoroughly dysfunctional since term limits were imposed, transferring power from the people’s elected representatives to permanent special interests and lobbyists. Moreover, few could agree that the nation was better off with George W. Bush as president as opposed to a third Bill Clinton term, who certainly would have continued to manage our nation’s economic and fiscal success.

Term limits deprives voters of the opportunity to vote for the candidate of their choice.  People have a choice and they have exercised that choice in past elections. Council members have been defeated in West Hollywood. West Hollywood elections draw many challengers with diverse ideas and the voters in the city elect those candidates whom they think represent them well. In many respects, terms limits is a message to fellow residents that they aren’t making good choices, thus an artificial barrier needs to be implemented to stop them from continuing to vote for the candidates of their choice.

Answer: West Hollywood is among the most successfully managed cities in California. This city is fiscally strong, boasting a AAA bond rating and healthy reserves. During the height of the recession, unlike other cities, West Hollywood did not need to cut services or layoff or furlough employees. Indeed, as council member, I led and supported efforts to invest in our community, including expanded parkland, a new public library and new public parking opportunities.

As mayor and council member, I voted to increase our investment in public art, community gardens and enhance social services for those most in need, as well as increased public safety spending for our sheriffs.

West Hollywood’s economy continues to be bolstered by our central leadership role in the interior design industry, fashion, restaurant and hotel hospitality, and the movie, television, and entertainment professions.

As mayor and council member, I have supported policies and initiatives that will maintain and attract these industries in order to maintain the economic diversity of our community and to ensure that the city has the resources necessary to provide the high quality of services that our residents have come to enjoy, expect and deserve.

What is the ageist reference to these “old timers?” This is a blatant generalization that is uneducated and unappreciated. Please keep to the facts about specific candidates when sharing your comments.

Even if you don’t believe in term limits, vote the old timers out!

Prang has outstayed his welcome as council member – even if Measure C Term Limits passes – he will get to start as if he’s never run for office. WE need to get these old timers out of there: 7 Terms! Of course there’s going to be corruption or at least stagnation. Good job or bad job – it’s time to vote out all the old timers and vote YES on Measure C term limits – This is LONG over due.

Mr. Mayor, your comment “Moreover, few could agree that the nation was better off with George W. Bush as president as opposed to a third Bill Clinton term, who certainly would have continued to manage our nation’s economic and fiscal success.” This may well be true, however, you then must also look at the fact that WITHOUT term limits we could have been stuck with four more years of George W. Bush and Dick Cheney when his wealthy cronies put him back in office ad nauseum. Do you really believe that term limits is a “message to fellow residents that… Read more »