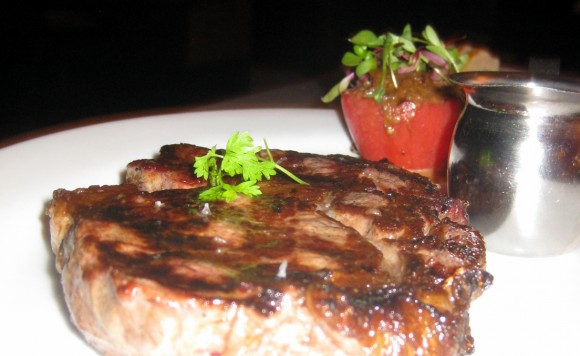 There is yet another steakhouse opening in my Norma Triangle neighborhood. Where are the vegans of yore? From The Palm to Dan Tana’s, from BOA to BLT, the stretch of West Hollywood between La Cienega and the Beverly Hills border certainly has no lack of seared cow flesh for carnivores. Somewhere there is a Hindu missionary not doing his job.

So, if one was to try and compete with all this great meat by opening a new venture he would almost have to re-invent the steakhouse. It seems one restaurant has the cajones to try. 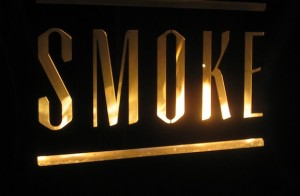 On a quiet stretch of Melrose between Robertson and Doheny, where the street is wide and the cars are few, lies a funky new upstart called Smoke. As I approach the place, the first thing I notice is that the sign in the front window is lit by rows of flames. Entering, I am greeted with black flocked wallpaper, granite tables and thick, black velvet curtains. Adding to my suspicion that I may have arrived at a nightclub rather than a steakhouse is the sultry, euro-lounge music pulsing from a sound system that has been enhanced by one hell of a sub-woofer.

Could it be that those flames in the window are powered by Frank Sinatra spinning in his grave? For one thing is certain: Ol’ Blue Eyes loved the traditional steakhouse: the crisp white linen, the old school class. I suspect he would have little patience for such gimmickry while he was throwing big money around.

But Smoke has no intention of imitating your grandfather’s steakhouse. It is not Peter Luger’s in Brooklyn, and it’s far from Morton’s in Chicago. No, Frankie would turn and walk right out of this place. He would undoubtedly head up the hill to Dan Tana’s where there was once a slab of meat named in his honor. Or, he would head down the block to Craig’s, the bastion of beef owned by Dan Tana’s former gatekeeper.

I stick around though, and I’m ushered to a velvety booth to await the proverbial steakhouse waiter. But when he arrives I note that he is not over 50, nor does he have the neck of a bulldog above a crisp white shirt and black bow tie. He does not look like he moonlights as a pit boss at the Hustler casino in Gardena. Instead, my server is tall, lanky, under 30 and has not a whit of an East Coast accent. I raise an eyebrow.

I order a Johnny Walker Black Rob Roy, straight up – a Manhattan made with scotch, and a drink that sometimes throws a green bartender for a loop. It’s also a test of a good steakhouse.  If the cherry that comes with it is Luxardo, the place has its ear to the ground. If it’s maraschino, you’re in a run-of-the-mill joint. The drink arrives: I get no cherry at all. I frown. The drink is good though, with the sweet and dry vermouth balanced well.

Perusing the menu I see that Smoke is following the Dan Tana’s model more than that of The Palm by leaning Italian. There are five pasta dishes, with inventive and tempting recipes that are not just concessions to vegetarians. They also have roast chicken, duck and salmon.

The “wedge” salad is audacious in two ways. First, it is not a wedge at all. It is chopped coarsely. Second, it is done with ranch instead of blue cheese. Easy, Mr. Sinatra. Change is not always a bad thing. In this case it is surprisingly good. It’s creamy, with a buttermilk tang that works well with the cured bacon.

The other two starters are hit and miss. The hit is billed as Hamachi Crudo, Yuzu Cucumber, Ginger Dashi Dressing ($20) and is fresh and piquant. The other, Big Eye Tuna Tartare, Smoked Eggplant, Stuffed Piquillo Pepper ($18) suffers from sesame oil dressing that cries for some brightness and a stuffed pepper that didn’t taste like much.

Suddenly the table is covered with food. The runner has delivered the entrees and the side dishes, the latter including potatoes au gratin, heavy on the bread crumbs with a horseradish sauce that comes off more like a Dijon mustard as it crawls into your sinuses. The creamed spinach is served in a ramekin and is creamy almost to a fault.

The main event, a 12 oz. rib eye, comes with a stuffed tomato and a demitasse pitcher of au poivre – one of five sauces available. It’s charred nicely, well-marbled, and at $39 a hair cheaper than you might pay across Robertson.

The Slow Braised Short Ribs, Tuscan Kale, Fried Parsnips ($28) is well-balanced, the bitterness of the kale offsetting the sweet marinade of the ribs.

My server tries to tempt me with a dessert menu, but instead I take the opportunity to ask him how the place is doing.

“Good,” he replies. “It’s a little dead tonight, but it was crazy over the holiday weekend. We’re still trying to find our footing in the neighborhood.”

Smoke has an uphill battle, but the food is good. If it wants to be a steakhouse, the younger crowd, having a limited point of reference, may not care if the traditional format and menu has been sacrificed to the gods of hip. However, I would bet that the silver-haired set – the bread n’ butter of most steakhouses – will not forgive Smoke’s transgressions so easily.

In the end, the future of Smoke is likely to hinge more on clever marketing than breakthrough cuisine. It’s set up to be a scene, now all it needs is the scenesters.

Broseph’s Restaurant Group, which owns Smoke and WeHo’s Fatty’s Public House, is going up against this town’s well-established, juggernaut restaurateurs, sbe Entertainment Group, in a battle royale to claim the lion’s share of WeHo’s new breed of hepcats.

However it turns out, even Ol’ Blue Eyes would admire such a gutsy move.

awesome review I would go at least once

Great article. Thanks! I didn’t know about this place. Sounds interesting.