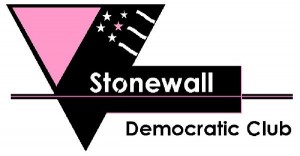 Incumbents Jeff Prang and John Duran won the endorsement of the Stonewall Democratic Club in their bids for reelection to the West Hollywood City Council on Monday night.

Prang, who has served on the City Council since 1997, handily won the club’s backing with 111 people voting for his endorsement and 15 voting against it. The vote on Duran, who has been on the Council since 2001, was a bit closer: 89 for, 38 against.

“I’m very excited about this,” Prang said. “I’ve been a member of the Stonewall Democratic Club. They’ve been the voice of the gay and lesbian Democratic community in Los Angeles since 1970. This is one of my home clubs, a place where I really cut my teeth on local politics. I’m very proud to have earned their support again.”

“I think that both Jeff and I have done a commendable job on the council and hope that the voters return both of us to office,” Duran said.

More than 300 people turned out for the LGBT club’s three-hour meeting held in West Hollywood Park Auditorium. The majority of the people were there to vote on endorsements for the various Los Angeles city races and left once those votes were finished.

It was 9:40 p.m. before the club got to the West Hollywood endorsements and the club had to be out of the auditorium by 10 p.m. Nonetheless, in keeping with the club’s bylaws, three people were allowed to speak in favor of a candidate’s endorsement, three to speak against it.

One of those who spoke for Prang was West Hollywood resident Lawrence Zakson who called him “far and away the best candidate.”

Resident Heidi Shink said, “(Prang is) a true progressive about West Hollywood, yet extremely pragmatic about getting policy passed.”

“Jeff Prang, when we speak to the City Council, he says he listens, but he doesn’t,” Lightfoot said. “When we talk to him about things in the process that are broken, he supports the process over what the people want. We need someone who’s got fresh ideas for this city. We need someone who’s out there in the trenches with the residents over the things that we are fighting hard for. Jeff Prang has lost that. He’s not doing that for us anymore.”

In the case of Duran, longtime activist Ivy Bottini said he has “passion.”

“I can count on (Duran’s) passion,” Bottini said. “We don’t always agree, but I love this guy. I watched him grow up. He pisses me off sometimes. You need to vote for him. He’s gotta be voted back into West Hollywood City Council.”

After securing his own endorsement, Prang also spoke in favor of his colleague.

“(Duran) does get a little bit eccentric from time to time, but that is the mark of a true leader who cares deeply about the city,” Prang said. “John brings a tremendous amount of value and it would be a tragedy not to have him return.”

Resident Elyse Eisenberg spoke against Duran, saying he is not responsive to residents. She noted his vote in favor of the now failed Centrum Sunset project proposed for the former Tower Records site at 8801 Sunset Blvd. at Holloway despite overwhelming opposition from residents living in adjacent West Hollywood Heights.

Former council member Steve Martin, who is running for council again in March, slammed Duran, listing a number of his shortcomings.

“My friend John Duran just seems to be losing it,” Martin said. “The fact of the matter is he’s non-responsive to the community. He’s disrespectful to the community. He’s actually told people they shouldn’t come out to vote. His tantrum during the West Hollywood Democratic Club (endorsement meeting in January 2012) where he said, ‘We’re not all lesbians’ was a misogynist slur if I ever heard one.”

“(Steve Martin) screwed me,” Buck said. “He told me lies to my face. He betrayed me. He’ll do it to you. It is pathological. This is not about a race for city council, this is about that man’s ego and we’re voting him down.”

After winning their endorsements, neither Prang nor Duran had time to make an acceptance speech as the meeting was running past 10 p.m.

The club will meet again on Monday, Jan. 28 to continue its endorsement votes for other races in Los Angeles County. At that meeting, the club will also vote on various ballot measures, including Measure C, the West Hollywood city council term limits initiative.