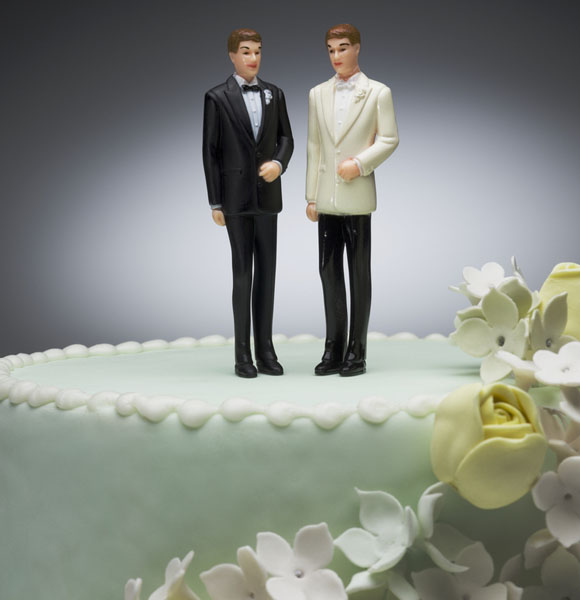 One of my friends married his boyfriend not long ago (I actually attended the wedding in NYC, and it was pretty amazing). Now David is introducing Clay as his “husband.” Gotta tell ya, it makes me want to ask if Clay is the wife. (And that leads me to inappropriate thoughts about sexual positions). I haven’t had the nerve to ask, because it seems like none of my business, but are gay and lesbian people who get married struggling with what to call their spouses? Husband? Wife? Significant Other? Partner? None of those words sound quite right to a straight (and happily single) guy like me.

Before same-sex marriage became legal (in nine states now), I used the term POSSLQ (“possel q”) to describe committed same-sex partners who shared a bed with some regularity. POSSLQ stands for “persons of the opposite sex sharing living quarters,” but it also could be read to mean “persons of the same sex sharing living quarters,” and the allusion to possums tickled my native Tarheel imagination. (Q: What do you call a dead possum on a North Carolina highway? A: Dinner). It’s not a term that seems to have stuck.

A recent story in The New York Times explores how unmarried same-sex and opposite sex partners continue to struggle to find a term for their “better halves,” “significant others” and “baby daddies” and “baby mommas.”

These days, more and more of the POSSLQs who play on my team aren’t just sharing their beds — they’re shackled by law. They are, legally, spouses, and so there’s some pressure to come up with a new term to describe the situation — something sweeter than “indentured servant” and less moony than “life partner.”

In conversations with my gay and lesbian married friends, I find they all struggle with how to describe one another to third parties. “Partner” sounds very businesslike. “Significant other” does make clear that there’s actually a tie that binds. And, at least for me, “husband” has all the wrong allusions. It comes from the Old English “husbonda,” which means “male head of household,” and thus doesn’t imply equality in a relationship.

Also, it is the term used to describe the male partner in an opposite-sex marriage, as “wife” does the female partner. I worry that using it takes us another step toward becoming so totally assimilated into hetero culture that we’ll all be playing golf and watching the Super Bowl in another 10 years instead of watching “Glee” and the Oscars.

Given that I’m single, it’s not an issue that I have to grapple with at the moment (although please let me note that my ring size is 2.25 and I prefer platinum to silver or gold). But if I were betrothed, the term I’d likely use to describe my other half is “mate.” I know that wouldn’t work in the UK, where “mate” means three things: “bo” (as it also does in the Southern U.S.), “bro” (in urban U.S.) or “man” (as in “hey man,” used pretty much everywhere). But it’s a term rarely used in the United States, and I like it because it suggests both a sexual connection and a long-term connection. Also, I think it can be used by lesbians and gay men.

So yes, Matt, as my meandering probably makes clear, we are struggling with what to call our married selves. Given that NASA has announced an asteroid naming contest and Mountain Dew had a soft-drink naming contest, maybe Freedom to Marry, one of the more prominent same-sex marriage advocates, could sponsor a contest to come up with a term we all can embrace.

I’m thinking that a great prize, once Nevada approves gay marriage, would be a weekend in Las Vegas — a great place for both a quick marriage and a quick divorce.

Kelly – sure, that’s much better than “fake” men and “fake” women. I didn’t know that homosexuals weren’t “real”…..but then I don’t hang out with bigots.

Hey I have an idea ! why don’t real men marry real women then we don’t have to figure out what to refer people as.

Husband is a bad word for gay or straight couples as it simply means male head of family. ..mate certainly would not work in Australia as it already applies to close friends who aren’t necessarily having a sexual relationship. ..spouse is already recognised as a non gender married relationship….definitely my choice

I have always called Kevin my “husband” and I am his “husband”. I am proud to be one of the 18,000 couples who were lucky enough to get married in 2005, before the unconstitutional Prop 8 reared its ugly head to California. What’s wrong with “husband and husband?”

Having gotten married in the Netherlands where there is a gender neutral Dutch word for spouse in common use by straight couples, we adopted that. When we returned to the States and registered our Dutch marriage in Massachusetts, we just started referring to each other either by name or as “spouse.” The word spouse carries none of the gendered and role bound connotations of husband or wife and is clearly about a legal marriage, so it fits well.
Heather