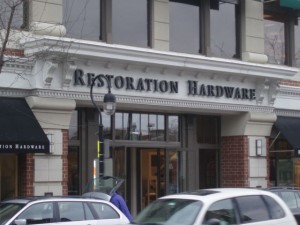 The West Hollywood West Residents Association (WHWRA) was denied its petition to stop an approved construction project along Melrose Avenue on Tuesday, according to a Los Angeles County Superior Court “tentative order.”

Concerned residents filed the petition on Sept. 19 hoping to stop BMB Investment Corp and the city from moving forward on the project, which will bring a Restoration Hardware store to the 8564-8590 block of Melrose Avenue at Westmont Drive. The project will be a two-story, 30,000 square foot building with 130 parking spaces on two underground levels, and will primarily house home furnishing showrooms.

The association contends that critical details of the project were switched at the last minute and that the project should require an environmental impact report (EIR).

However, the court, in its ruling wrote: “(The) petitioner has not made a fair argument, based on substantial evidence, that there may be a significant adverse impact which would require the preparation of an EIR.”

“We’re very disappointed in the judge’s ruling,” said Lauren Meister, president of the Residents Association. “I don’t know what the next steps will be, but I do know that the city’s actions in all of this were not well received by the neighborhood and city council members will have to be held accountable for their decision to approve this project as proposed.”

WHWRA had hoped to stop the city and BMB from moving forward until the proper studies had been carried out, and the project was scaled down.

Size is not everything. The fact of the matter is that the City Council said during the General Plan process that the south side of Melrose would be kept at two stories. Glad you are happy with the mega-mixed use on your end of town. Different strokes…
Steve Martin

I wish was the biggest problem we on the east side face. Wow, a 2 story upscale home furnishings store with plenty of parking? This is an insane argument from WHWRA!!

Why not exert some of your influence on improving conditions closer to La Brea–and protesting much desired mixed use projects is NOT what I mean.