[dropcap]T[/dropcap]here isn’t a whole lot in Los Angeles nightlife that’s permanent. Restaurants and bars come and go. A nightclub can open, become the hardest place in the world to get into, and then close all in less than a year.

Which makes The Abbey a true anomaly, a place that has never stopped evolving and yet, after 23 years, remains a fixture, perhaps the one truly indispensable location in Boystown.

“It’s beyond being an institution,” said Steve Martin, an attorney and city council candidate living in West Hollywood. “It’s definitely Boystown’s flagship business. It doesn’t have any kind of rival.”

David Cooley is the polite, unassuming 53-year-old mastermind of what MTV has called the greatest gay bar on the planet. He’s not nearly as extroverted as some nightclub owners, like Brent Bolthouse or Amanda Demme – but then again, The Abbey isn’t really a nightclub. In fact, it started out as a coffee shop. Over the years, Cooley has tinkered and tinkered, expanding five times, redecorating and redesigning.

“I’ve lived in this one home for 11 years, and I’ve remodeled four times,” Cooley said. “It’s a sickness.”

“My philosophy is, everyone’s always welcome at The Abbey,” Cooley said. “Everyone’s treated as a special guest. There’s no red velvet rope. There’s not even a cover charge – even on New Year’s Eve or Halloween.”

As with any institution, anxieties abound that The Abbey has changed, becoming too big or too straight, especially after Cooley merged operations with big-time Hollywood promoters SBE. But even its critics are forced to marvel at the bar’s meteoric rise.

“David Cooley took a sleepy little coffee shop that started 20 years ago and turned it into something internationally renowned,” councilmember John Duran said.

Cooley grew up in Solon, Ohio, a small, affluent suburb of Cleveland. His parents are both educators, although for a time, his dad owned a restaurant. Cooley remembers working there when he was 5, and when it came time to pick a major in college, he decided on hotel and restaurant management, which he studied at the University of Nevada-Las Vegas (UNLV).

Out of college, he turned down an offer to enroll in Sheraton’s management training program, and decided instead to move to West Hollywood.

“At that time I was realizing I was gay,” he said. “I came out here and saw the lifestyle – the acceptance of the lifestyle. I felt safe, I felt welcome, I felt like I wasn’t the only one. So I turned down my job offers.”

At first, living in West Hollywood was a struggle. Cooley cleaned houses in Malibu, waited tables in Marina del Rey and washed cars anywhere he could.

“Then I got involved in finance. I was a stockbroker for Merrill Lynch for a couple years,” he said, as nonchalantly as if he were saying, “and then I took a left on Melrose.”

Cooley tells his whole story like this, with little reflection or incredulity, as if it was just something that happened. He doesn’t seem to think too deeply about his life, about the decisions he made and the inspiration he had.

When asked if he spends most of his day working or playing, he replies, “my work is my play,” one almost gets a sense he doesn’t understand the distinction. And yet Cooley doesn’t act like a workaholic – he spends much of his time traveling around the world, and usually not for business (He owns a house in Montreal, where he often visits, as he does Barcelona, London, Sydney and Mykonos, Greece).

After Merrill, Cooley worked as a branch manager for a Wells Fargo in Larchmont Village. It’s hard to imagine a place more diametrically opposed to The Abbey than a bank, but Cooley loved it there, and stayed for seven years.

After that, he was ready to take a risk and start his own place – a coffee shop. The decision was, in a way, about as random, for Cooley, as joining Merrill Lynch. To this day, Cooley hasn’t had a sip of coffee in his life.

The venture was risky for other reasons. It was 1991, before Starbucks dotted the landscape (the first one opened in L.A. that same year), before coffee shops became licenses to print money. They simply were places college kids went to hang out and listen to poetry.

“People would say, how are you gonna make money on coffee?” Cooley said.

What’s more, Cooley opened his spot on the east side of Robertson (across the street from The Abbey’s current incarnation) – now a chic location but then an off-brand drag with a car wash, a terra cotta store, and a dry cleaners. 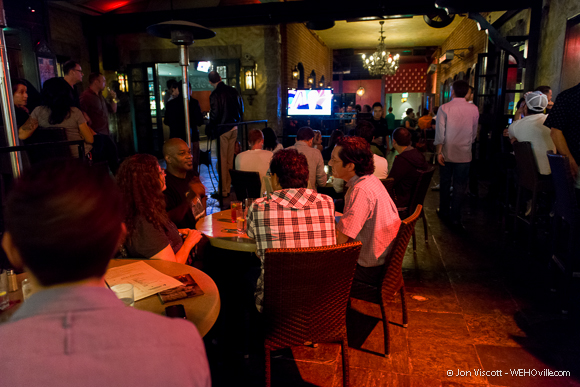 Nevertheless, The Abbey, named for its church pews and stained glass windows that came with the property, caught on quickly, especially with a group of young gay men.

“It was one of the few places you could get in if you were under 21,” said Scott Schmidt, a local activist and former council candidate who used to frequent the fledgling coffee shop. “People would bring their books and study.”

From the very beginning, The Abbey offered a different kind of scene than most of WeHo, and catered to a less boozy crowd. Many in that crowd were in 12-step programs that met frequently at the Lion’s Clubhouse (aka The Log Cabin) on Robertson.

“It was an alternative to bars, which were awash with drugs and alcohol and loud thumping music,” Martin said. “It provided a space for people who were not into the bar scene, who were into recovery.”

After three years, The Abbey moved across the street, taking over the terra cotta store, and became a bar.

At the time, gay bars were dark, seedy places with smoked-glass windows. The bar version of The Abbey was something different – open doors, open windows, a patio, a fountain (from the terra cotta store, of course).

“West Hollywood helped me recognize who I was and feel accepted,” Cooley said. “I wanted to take that agenda and push it up a notch. When I was going out, there was not a place that I would feel really proud to say, take your parents or take a date.”

It was, if not completely revolutionary, at least ahead of its time. Now, bars with open doors and outdoor patios line Santa Monica Boulevard. 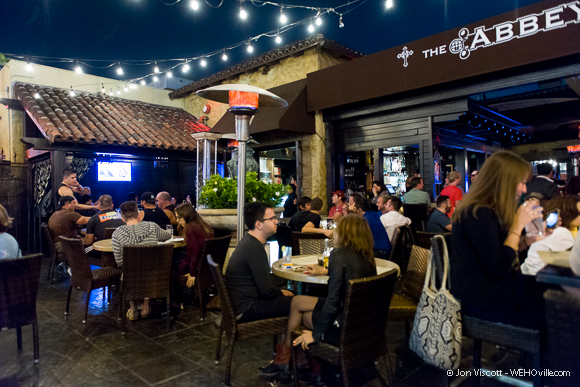 The Abbey soon exploded in popularity. At one point, according to Cooley’s publicist Brian Rosman, it was the single largest purchaser of vodka in the world, and helped popularize the flavored martini trend. It was also a favorite spot of Elizabeth Taylor’s, whose last public appearance was at The Abbey with her dog Daisy.

It expanded and expanded, taking over a second building, with a patio in the middle, totaling 14,000 square feet. It now has more than 200 employees.

“It slowly became this mall of a gay bar,” said Rusty Updegraff, a local nightclub promoter who has produced events at The Abbey. “It has become like the Chucky Cheese of gay bars. I’m not saying that as a put down. It’s just gone to a whole different level.”

In 2006, after more than a year of negotiations, SBE — a restaurant / nightclub / hotel empire founded by promoter Sam Nazarian – approached Cooley and offered to buy The Abbey.

SBE reps decline to be interviewed for this story, and Cooley wouldn’t say what percentage of The Abbey SBE owns, or what percentage of SBE he got in return (although he did say he now owns part of SBE, making the sale seem like more of a merger, perhaps Cooley’s financial background paying off).

Cooley did say the creative decisions made at The Abbey are his alone. But after the sale was finalized, he went on vacation, traveling the world (his publicist says it was only for a couple months). Longtime customers say things began to change.

“For a while it became quite Hollywood,” said Owen Ward, a marketing consultant who calls The Abbey his second home.  “The focus was a lot on selling bottle service. It seemed like there was a large influx of women you’d see at a Hollywood club.

“They’re marketing to more of a straight crowd,” said Uptegraff. “People were unhappy.”

Although Cooley and his publicist said the period wasn’t very long and the changes weren’t very drastic, Cooley must have sensed the unrest, because he apparently came back to town and restored order, bringing back his old general manager and sending the security guards in suits packing. Since then, according to Cooley, SBE has taken a much less heavy hand in The Abbey’s operations.

One of the main reasons Cooley partnered with SBE in the first place was to expand The Abbey to other locations around the country. But despite years of scouting and near-deals, it hasn’t happened – partly because of the recession, and partly because of Cooley’s high standards.

“I’m very particular,” he said. “And whatever second city we go into, I got make sure it’s superior to what I have here.”

Cooley and SBE were close to making deals in Chicago and San Diego, but they never pulled the trigger.

“It’s hard to repeat what we’ve had here,” Cooley said. “I can’t go into any city and say, I want 14,000 square feet with multiple ceilings, indoor and outdoor space, surrounded by a public park, in a gay friendly, pedestrian community. It’s hard.”

But even without other locations, The Abbey is a global brand, a significant force (at least for a bar) in cultural and political issues. When a major gay rights story breaks, such as the passage of Proposition 8, news crews inevitably show up at The Abbey to gauge the reaction of the gay community.

This is partly by design; Cooley has actively sought out the political spotlight. In May, The Abbey banned bachelorette parties until gay marriage is legalized across the country. Cooley insists the move (which was done without even informing SBE beforehand) was purely about making a political stance, although one can’t help but wonder if part of his motivation was to preserve The Abbey’s “gayness.”

The Abbey employs 18 or so male go-go dancers, who swing from ceiling-mounted iron bars, a performance that Cooley calls “Cirque d’Cooley.”

The move generated an enormous amount of media coverage – mostly positive. But some customers still lament that The Abbey has gotten too straight for its own good.

“I’ve heard that,” Cooley said. “Even my customers go, ‘Oh, it’s becoming so straight.’ My argument is, ‘Finally.’ This is what we’re all working hard for.”

I am so Happy the Abbey is all yours again.

Steve, The Abbey does not take anything away from Stonewall. They can both be successful. Why shouldn’t the landmark bar for every major American city be a gay bar?

I used to love The Abbey, as did all of my friends. But alas, the place is a **hole now! Nothing but a bridge and tunnel crowd these days. It is never even an option when deciding where to go out in our fair city. Sadly most everyone I know, and most everyone in the area feels the same. We miss the good ol’ days.

remember “the pik me up” coffee house on 6th street near labrea (next door to the king king) and the onyx coffee house next to the vista theater in silver lake?….i’m sure there were many before them, but these 2 were very popular>>>>>>the cash wash on robertson part in the article stumps me tho

Aside from the spelling and grammar errors, I’m surprised to see no mention of The Living Room coffee shop on La Brea, which Cooley completely ripped off to replicate on Robertson. “Random” decision? Hardly.

The Abbey is the “world’s most famous gay bar”? What about the Stonewall Inn?