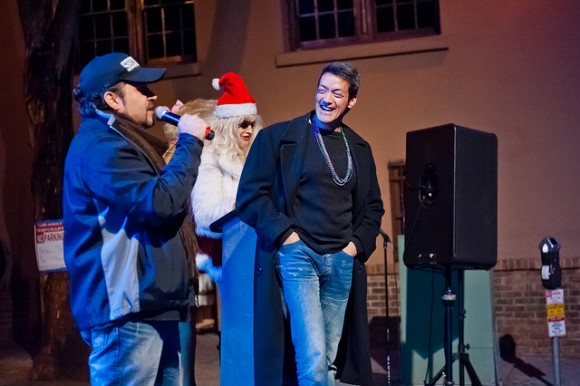 I feel like I’ve been waiting my whole life for the “End of the World.”

In the 1980’s, the specter of nuclear war with the Soviet Empire loomed over my life. I was a quiet kid, with a vivid imagination who spent most of my time with my face in a book or digging through my brothers’ VHS collections. And the vague and distant fear of mushroom clouds and utter annihilation was occasionally thrown into sharp relief by stories like “Sadako and the Thousand Paper Cranes,” or Ray Bradbury’s “There Will Come Soft Rains,” and movies like “WarGames.”

In the 1990’s, there was a fresh apocalypse around every corner. Louis Farrakhan, the leader of the Nation of Islam predicted that the First Gulf War was the opening act of a Biblical (or “Koranic”) Armageddon. Later in the decade, Marshall Applewhite claimed that the return of the comet Hale-Bopp was a sign of the world’s impending end. At the end of the millennium, it was “Y2K.”

Since then, predictions of the End of the World have only become more frequent, culminating in the mystical “End of the World” prophesied by ancient Mayan astrologers — to fall on Dec. 21, 2012.

Naturally, the City of West Hollywood, led by councilmember John Duran, decided to observe it with a big block party.

Of course, these ancient astrologers prophesied no such thing. The ancient Mayans especially excelled in the areas of mathematics and astronomy, and they had an elegant and complex series of interlocking calendars, which they used for different occasions. There was a 360-day calendar called a “tun,” a roughly 20-year calendar called a “ka’tun,” and, most importantly for people eagerly awaiting The End of Days, a calendar called the “b’ak’tun,” which runs approximately 394 years.

Dec. 21, 2012 marks the end of the 13th b’ak’tun. But for the Mayans, whose calendars were a series of interlocking wheels, like the gears of a clock, a complete rotation of one wheel was no more the end of the world than a clock striking midnight is to us.

Still, I’ve never been one to let reason get in the way of a good time. So, despite a runny nose and sore throat, I wrapped myself in a warm hoodie and bright blue scarf, and dragged my sweet boyfriend with me to the West Hollywood “End of the World Block Party” on Larrabee Street between Revolver Video Bar and Eleven Nightclub.

We arrived at 8 p.m. to find Larabee blocked off and flooded with light, but no revelers celebrating the End of the World, or anything else. Instead, there was only a stately drag queen wearing a green-and-pink plaid skirt-suit and a poinsettia in her hair, “Mamma” Worthie Meacham. Meanwhile, a crew of workers with City of West Hollywood logos on their vests assembled a stage and platform behind her.

This party was clearly delayed. 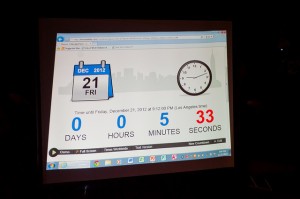 Fifteen minutes later, it remained in a state of pre-production, but now a screen with a clock counted toward 9:12 p.m. As far as I can tell, the chosen doomsday time was a product of advanced calculus only understood by councilmember Duran. I haven’t found any other reference to that specific time. But there is something pleasingly symmetrical to the idea that the world would end on the 12th minute of the 21st day of the 12th month in the year 2012. While the clock ticked closer to 9:12, DJ Josh Pearce began to spin some pleasant techno music.

“Are you prepared for the possible End of the World?” I asked Mamma.

“Darling, we can’t control life, we can only control how we respond to it,” she said.

It was just after 8:30, and I was starting to worry the world would end before the party got off the ground.

They took their places and swayed to the beat.

Shortly thereafter, Momma joined them, as did a short scruffy gentleman in black jeans and a hoodie — the comedian ANT.

“Are you prepared to die in that?” Momma asked ANT about his choice of simple wardrobe.

“I told this woman I wouldn’t sleep with her unless it was our last day on earth. I figured if I’m wearing this, she won’t want me,” ANT responded.

By now, a small crowd of 40 to 50 brave souls had gathered around, drawn in from Santa Monica Boulevard and the surrounding bars by the thumping techno bass, and sassy drag commentary. But the onlookers held back, well outside of the comedic splash radius, except for a middle-aged lesbian in a black leather jacket and Santa hat who moved and swayed directly in front of the stage to music only she could hear.

“I don’t know what you are on, but I wish I was still using,” ANT told her. 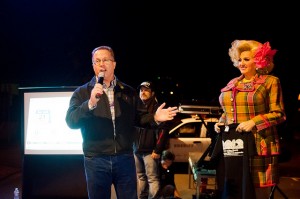 ANT and Momma tried to lure the rest in with the promise of T-shirts, carnival beads and little paper horns. “Call them ‘Blowers,’” Momma advised ANT. “That’s what this crowd is looking for.”

After several agonizing minutes, I took pity on our hosts. I made my way to the front and volunteered to climb on-stage to answer some questions.

Momma asked, “If this is your last night on earth, how would you like to spend it.” Without thinking, I answered “Having sex with my boyfriend.”

And so, they brought him on-stage, and immediately peppered us with questions about our sex life and genitalia. Before we got too embarrassed, I snatched the microphone away from ANT and thanked them both for having us.

We quickly made our way back into the crowd, shirts in hand.

Four or five lucky contestants followed us, each one a little more wasted on the Mayan Margaritas than the last. Each one was asked: “How would you spend your last night on earth.” Answers ranged from the cryptic (“Doing all the things I have already done.”) to the obvious (“Having sex with as many dudes as possible!”) to the incoherent (“I love to dance!”).

It’s a lost cause. Mamma and ANT heaved the remaining shirts and beads into the crowd.

At 9:03, nine minutes before the “End of the World,” Duran and mayor Jeffrey Prang took to the stage for brief, pre-apocalyptic comments.

“Were the ancient Mayans on Mountain or Pacific Time?” asked Prang.

Duran indulged him with a complicated explanation for how he arrived at the “9:12 p.m.” timeslot — and I’m pretty sure it went over everyone’s heads.

No confetti. No balloon drop. No “End of the World.” No toast to having survived.

As countdowns go, it was pretty anti-climactic.

After a few seconds at zero, the clock even began counting back up: one, two, three, four … leading me to wonder if Superman had saved us all by flying widdershins around the world really really fast.

Afterward, Momma welcomed “surprise special guest” Derrick Knight (who was only a surprise to people who failed to read any of the city’s promotional material) to the stage for a performance of his song “Mayan Rain Dance.”

The crowd melted away, and the crew began to break down the stage before our hosts had finished saying “Thank you, and goodnight.”

As we made our way home, my boyfriend and I talked about the “End of the World.”

“I’m glad that wasn’t how we spent our last night on earth,” I said as we got in the car. “But at least it was over with pretty quickly.”

“Maybe the world did end, and we just don’t know it when we see it,” my boyfriend said. “Maybe we all get a fresh start.”

Perhaps he’s right, and the “End of the World” is what you make of it.