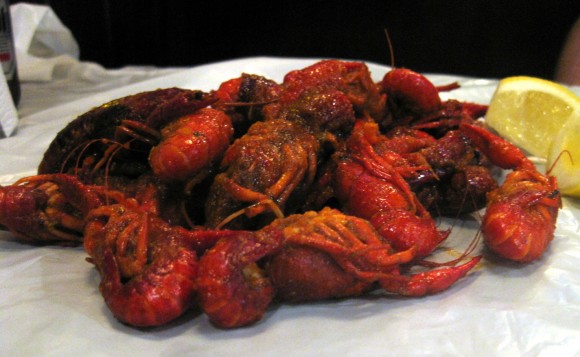 For a few months now I’ve been telling friends that there’s a new restaurant opening at The Gateway. This is usually as far as I get with this conversation because WeHo has never really embraced the shopping center at La Brea and SMB as “The Gateway.”

I field glassy stares at this point and offer: “Under the Target.”

“Near the old Zeke’s Barbecue?”

“Where that Italian chain restaurant was,” I continue, but I’m distracted now. I’m reflecting on Zeke’s all of a sudden. Though the death of Zeke’s was rumored to be more of a result of embezzlement than that of finicky palates, it is still a potential warning sign, a memorial cross on the side of a treacherous, culinary road: WeHo and environs doesn’t take too kindly to Southern food. Take, for example, the short-lived barbecue bubble-up of a few years back (Zeke’s, The Pig, Baby Blues), where only the latter has been left standing. Even L.A.’s high-end, celebrity-backed Dixieland ventures (Reign, Georgia, Memphis) all were shuttered far too soon. And have we forgotten the most authentic of all? The ill-fated Cajun Bistro on the Sunset Strip? Um … yes. Yes, we have.

“So what’s this new place called?” they ask.

More glassy stares, but this time tinged with mistrust.

Now they really don’t believe me. Cajun food from Nevada?

As a fan of New Orleans and its cuisine my own eyes begin to brighten with hope. I reflect on the town I miss so much, in particular the folksy, peel-and-eat seafood joints leaning over hot and briny streets: Deanie’s Seafood on Iberville in the French Quarter, or the blown-down Jaeger’s on Lake Pontchartrain. But could it be the same in West Hollywood? Could I have the same experience in a place that isn’t ramshackle and boiling under the Acadian sun, the air thick with humidity and the faint tinge of ubiquitous sick perfuming the gutters like some jazzy grace note? Okay, that doesn’t SOUND appetizing. But the smell is a signal that the cuisine that waits inside those joints is meant to indulge you and free you of your worldly concerns. That’s the Big Easy in, well, a crawfish shell. 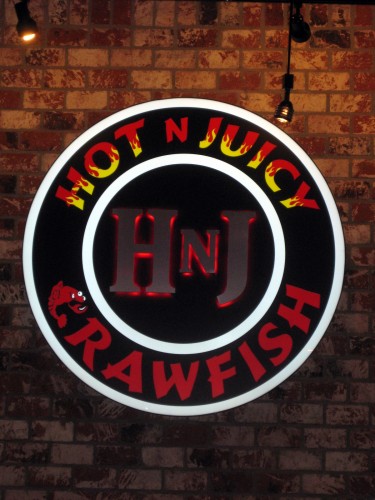 Entering Hot N’ Juicy Crawfish I hear trance music playing — or maybe it’s some other electronic sub-genre — but it certainly isn’t zydeco, or jazz or country. It becomes even clearer when I order a beer and find no Southern brands (Dixie, Abita, Southern Star) that this is not Disneyland and the place has no intention of being an immersive experience. With a knitted brow, I settle for a Japanese brew. I crane my neck looking for the slightest hint of Southern kitsch: Mardi Gras beads in the rafters, a faux tin roof, a black-and-white portrait of Louis Armstrong or voodoo queen Marie Laveau, or even a good ‘ol steer head. No, just an expansive, brasserie-bright dining room hung with a few fishing nets and lined with flat screens showing the game. Fair enough.

Then the plastic arrives; lots of it. Three members of the wait staff descend on my table and cover it securely in the stuff. Then they offer to cover me.  I’m offered a bib and gloves. Yes, gloves. Within moments my window booth looks like it’s been prepped by a paint crew. An entire roll of paper towels on a spool appears. When the crawfish comes, it also comes in plastic: plastic bags full of crimson critters sitting in a reddish brown mud the consistency of pesto. This mud, one of five offered sauces, is my waiter’s favorite, known as the Hot N’ Juicy. It is thick, murky and fragrant with garlic, pepper and spices.

Now, if you have never eaten crawfish, this is the sequence (small children and the elderly should leave the room):

As I work for each morsel, thinking “my kingdom for a finger bowl,” more plastic bags arrive: shrimp bathing in lemon pepper, lobster and king crab legs in a gooey bath of garlic butter. In true Bayou style I decant these bags onto the table. Before long I realize — with something close to horror — that I am dressed like a coroner and sitting before a mountain of gore: decapitated mud bugs, destroyed carcasses and dismembered appendages strewn across a four-top that now looks like a crime scene.

“How does everything taste?” asks James, my sweet and ebullient waiter, his eyes bright. This is the soft opening of the place, and his eagerness to show me a good time shames any critical thought from my head.

I suddenly realize that I look like Hannibal Lecter now and do my best to make myself presentable, tearing off some paper towels from the provided roll. “Good,” I stammer. “Thank you.” I kind of want him to leave for no other reason than I am holding a plump, painstakingly harvested chunk of king crab leg — my favorite part of the meal so far — but I am not going to shove it into my gob with my glistening fingers until he turns his back. So help me, God.

I think to myself, if one could survive a first date at this place then one could start planning their 20th anniversary immediately.

Some sides arrive: crispy corn fritters and etouffee, the latter in a Styrofoam pint container. I deflate visibly. I was pining for the well-plated, complex flavors that Galatoires offers on Bourbon Street 2,000 miles away. Suddenly I feel that far from Creole country. But is that fair? At least it’s etouffee, right? Try finding THAT outside the Gumbo Pot at the Farmers Market. I dig into the smothered rice.

Temporarily distracted, I have forgotten that morsel of king crab in my other hand and pop it into my mouth. It is sweet, tender and cooked perfectly. At $20 a pound (two monster legs) it fills me with a devious plan to revisit.

I pick up a crawdaddy from the pile, wiggle it like some macabre puppet and can’t help but wonder: Will WeHo suck the head? Is there enough of us who will cajole our friends to dive into the peel n’ eat experience with total abandon? Perhaps it would help if there were some obvious Cajun-themed images on the walls of the restaurant. I have never been one for such a thing, but in this case I long for it. Piling on some atmospheric clichés would provide some merciful cover, a good excuse to vacation from our dietary restrictions and basic table manners.

But the trance music plays on. The football game continues along the brick walls. Perhaps the owners know something I don’t. Perhaps they are going to bring West Hollywood into the South rather than drag the South all the way here, like so many others have tried to do before. As I finish, attempt to clean myself up with a wad of paper towels and get to my feet with whatever dignity remains, I have to concede that it is certainly worth a try.