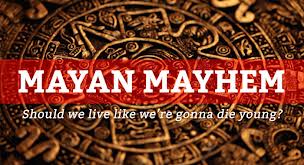 Never missing an opportunity to celebrate, the City of West Hollywood is hosting an “End of the World Party” to coincide with the new age prediction that the Mayan calendar marks December 21st, 2012 as the end of the universe.

Sponsored by Councilmember John Duran, the Boystown festivities are admittedly simply another excuse to let loose. ​Not that the modern day Mayas are the least bit offended. Despite centuries of cultural oppression and discrimination, the Mayans and their culture are very much alive and even on the rebound in the Yucatan, Guatemala, Belize and the southern Chiapas state of Mexico. ​The “Mayan end of the world” is a western fantasy, based upon some unsupported assumptions extrapolated from an ancient text. Our Dec. 21, 2012 is the end of the 5,125 year “Long Count” Mayan calendar, which most experts believe was simply the end of a calendar cycle. There is virtually no evidence that the ancient Mayas believed that the world would end in 2012, and it holds no credence with the modern Maya. The 2012 cataclysm is simply a conceit of New Age pseudo-science rather than anything connected with Mayan culture.

​The West Hollywood celebration was sponsored by Councilmember Duran, who constantly reminds us that he is the only Latino member of that august body. In his mind, our hopefully boisterous Boystown event is somehow a manifestation of Latino culture. The city has developed an advertising logo that will grace form fitting tank tops that supposedly celebrate a “Mayan” event. ​The Mayans are not particularly insulted by the connection with this date with a drunken street party. Indeed ritual intoxication is a common feature in many of the semi-pagan fiestas proudly celebrated by the modern Maya. ​What is offensive is that West Hollywood’s logo for the Mayan End of the World Party is based upon the iconic Aztec calendar stone of Tenochtitlan, modern Mexico City. To put it in a Eurocentric context, it is similar to flying the German flag on Bastille Day.

​As a person who is proud of my Mexican heritage, I find it somewhat embarrassing to have to point out to a Latino elected official that Aztecs are not Mayan and Mayan are not Aztecs. While John Duran might not have designed the logo, you would think that he might have been aware that it was historically inaccurate and culturally inappropriate. ​While the Aztecs, or the Mexica as they prefer to be called, were uncouth barbarians roaming what is now northern Mexico, the Mayans had developed an incredibly sophisticated culture centuries before the Aztecs had even entered the Valley of Mexico. The Mayan calendar remains one of the great accomplishments of human kind, whose accuracy astounds scientists to this day. This is Mexican history 101.

​The Aztec calendar that graces the logo created by the City of West Hollywood is beautiful, but it was bears about as much relation to the Mayan calendar as an adding machine does to a computer as the Aztecs never reached the heights of mathematical achievement attained by the Mayans. Thus you can understand why use of the Aztec calendar in connection with an event supposed based upon Mayan culture might be a bit insensitive and perhaps even a tad racist. The Mayans of the Yucatan still have bitter memories of the decades long genocidal “War of the Castes” when they tried to throw off their oppressive Mexican overlords in the 1800s. Bad blood still abounds.

​But none of this should get in the way of having fun on the 21st. The modern Mayans have got no problem with it. Indeed, they have embraced the entire “end of the world” scenario as part of a marketing strategy funded by the governments of Mexico and Guatemala to entice gullible New Age tourists to visit and spend. ​A few years back I was visiting Panajachel on Lake Atitlan, Guatemala. Atitlan is a beautiful crater lake, flanked by five volcanoes, dotted with Mayan villages. The villages across the lake retain many of the old traditions. Indeed two of the villages have venerated shrines to the indigenous deity, Maximo, a “pagan” manifestation abhorred by the Catholic Church. ​In Panajachel a young local was selling t-shirts depicting flying saucers hovering over the lake emblazoned with the date Dec. 21, 2012. The salesman said that Lake Atitlan was one of the sites identified by certain gringos where the world as we know it would end due to contact with inter-planetary visitors. He laughed saying that the locals were baffled by the end of the world predictions but if it brought tourists to Guatemala, it was fine with them. After I declined to buy the t-shirt he wanted to know if I needed marijuana. ​

A few days later we were in Chichicastenango for the fiesta of San Antonio, a huge Mayan celebration with a procession and masked dancers whose Catholic trappings are a mere veneer for indigenous religious traditions. The fact that the fiesta is so close to the winter solstice is hardly a coincidence. Old men were falling over, blinded by drink and the music of the flutes and the pounding drums that kept time with the masked dancers had more the feel of a pagan festival than a Catholic ritual. It vaguely reminded me of Halloween in West Hollywood in the early 80’s. ​

Fortunately I don’t see how West Hollywood can make this faux-Mayan event an annual affair, particularly if the world actually does end. But the opportunity to use the event as a positive teaching moment to honor a rich culture has been missed. But I think that a number of West Hollywood Latinos might be a bit embarrassed by the cavalier ignorance of our history by one of our own elected officials. But don’t let that get in the way of the party.

wrong calender dumbass ,there is a difference between myan and aztec calender

Steve Martin was there in 1984 and now he’s a candidate again. If I were back there, I’d give my vote to Steve.

I don’t know what to do with the sentence, because it’s demonstrating a level of cultural ignorance that is as offensive as mixing up two different iconographies: ​”While the Aztecs, or the Mexica as they prefer to be called, were uncouth barbarians roaming what is now northern Mexico, the Mayans had developed an incredibly sophisticated culture centuries before the Aztecs had even entered the Valley of Mexico.” I’m going to just start: (a) We don’t know what the Aztecs/Mexica/Nahua prefer to be called because the Spanish killed them off before they had a chance to send us the memo (b)… Read more »

This Mayan Mayhem mess should be renamed the city sponsored Duran re-election kick-off party. Just saying what everyone is thinking.