I’m a straight woman with a lot of gay male friends — pretty much the norm for West Hollywood, I think. The gay men I know seem to enjoy the company of straight women. But they don’t seem to have lesbian friends. Why is that? Do gay men like straight women better than lesbians? Gay men would seem to have more in common with lesbians. 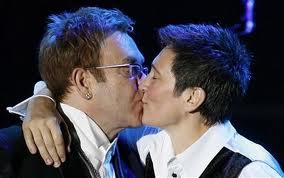 I have to give it to those great folks who have put together coalitions to fight for LGBT civil rights. It can’t have been easy. When you get right down to it, L’s and G’s have the same things in common as Mexican immigrants do with Chinese immigrants — legal and political problems. When it comes to culture, they’re as different as folks from Oaxaca are from those from Shanghai. (The T’s, whose gender choice may make them straight or gay, and the B’s, who can camp out on either side of the gay/straight divide, are another story deserving of their own columns).

To understand the relationship between gay men and lesbians, let’s take a second to indulge in some stereotypes. “Stereotype” is a term rightly disparaged when it means rigidly assigning the same characteristics to everyone in a particular group. At the same time, stereotypes also reflect a certain reality that’s useful for understanding a group so long as one also understands that not everyone in the group fits the stereotype.

With that apology-in-advance, let’s look at how the gays and the lesbians differ in four areas and what that suggests about their relationships with one another.

CARS. If you see someone in West Hollywood with short hair and a flannel shirt driving a Ford Ranger or a Subaru Forester (Martina Navratilova is their spokesperson), it’s most likely a lesbian. If it’s someone in a tight tank top with a faux hawk in a BMW 3 Series or a VW Jetta, it’s almost certainly a gay guy. Don’t take my word for it. Take a look at Car Talk’s survey of the ultimate gay and lesbian cars of all time. Who can argue with Click and Clack?

PETS. Here the stereotype is that gay guys like dogs and lesbians like cats. I beg to differ (a bit). My lesbian friends are all dog-crazy. They differ from my gay buddies in that the dogs they own and love are big — German shepherds, Doberman retrievers, even a pit bull.  My gay male friends go for the small dogs (I have a dachshund), with schnauzers, Pomeranians, and pugs dominating. (Thankfully, for those of us who try to promote a masculine notion of homosexuality, poodles and shih tzus seem to be fading in popularity).

BODY IMAGE. The gym — the gay man’s country club — is every bit as important to his appearance as the salon where he gets his back waxed, his brows plucked and his fingernails and toenails trimmed. At 24 Hour Fitness on Santa Monica Boulevard (my gym) guys are constantly lifting their shirts to check their abs in the mirror, counting to make sure all of the six-pack is still there. While there are some women who work out there, the gal pumping iron next to you there and at most gyms is most likely heterosexual.

The stereotype is that lesbians are not into fitness, and indeed often are overweight. A study published in the American Journal of Public Health five years ago found that lesbians were twice as likely to be overweight as were heterosexual women. The reason? The study cited other research that posited that lesbians feel more comfortable about the way they look than do straight women, and thus don’t focus so much on weight.  “Lesbians’ exercise behavior is not motivated by aesthetic reasons,” the study says.

So what do I take from all of this? When it comes to how we present ourselves and live our lives, gays are more about form and lesbians are more about function. Gay men and straight women focus on style and beauty because that’s what attracts men. So perhaps it’s natural that those two groups would more easily bond.

But what women themselves look for in a partner isn’t so much beauty (and here I’ll indulge in another stereotype) but dependability, understanding and support. We gay guys all say we want and need that, but we toss that aside in a second for a cleft chin, well-defined abs and a face without a wrinkle. Among my lesbian friends, dependability, understanding and support rank high in what they look for in a partner.

Ah, this is why after a few years of being out, I only dated bisexual men like myself: because straight women and gay men are vapid silly poodles. Meanwhile, straight men are brutes, as are most lesbians (bisexual girls are usually “liesexual” girls who just want attention). I used to live in WeHo and after years of the bitchy men and self-hating masochistic fag hags, I’m so glad I met another cute, sweet bisexual boy who had more interesting things to discuss than what “fish” got fat or what hot guy went to rehab. Oh yeah, and we both moved… Read more »

I’m a masculine gay male and I enjoy the company of lesbians more than other gay men! (Sorry . . . This statement is a big generalization I admit) Personally I feel there is a certain trust and down-to-earth honesty gay women have over most homosexual men. This actually could just be a gender man vs. woman thing.

As a lesbian I would have liked this article more had it suggested bringing these two communities together, celebrating the similarities instead of perpetuating the differences. Now I know why gay men are so rude to me, they must have read your article– please be more responsible with your writing as you directly affect our community.

Are you trying to argue that lesbians are dumb and rotund? What a mess of mind you have going on! I personally know many lesbian graduate students that are so smart, so wellspoken and so fit. Your entire post is a load of stereotypical, misogynistic rubbish!

Really this is passing for humor these days? Are you auditioning for the role of Jody in revival of Soap somewhere? Wake up darling your humor is dated.

In conclusion to this article – and as the one and only possible solution to everything – I may suggest that gay men immediately start to procreate with straight women, so that they can breed a race of Ubermensch to spread beauty and intelligence all over the word. Because – obviously – they are the most perfect people ever! Hail … yeah, you know who… But as I am bisexual and therefore busy climbing up and down the fence to collect the straight privileges on the one side and to educate those darn lesbians on all the important things in… Read more »

Well, I’m a lesbian who doesn’t own a single flannel piece of clothing, whose BMI is 19.73 and works out 3 times a week to keep it this way, who spends a lot of time choosing what to wear, who doesn’t drive and is terrified of big dogs, and is always asked for synonyms and explanations of many different terms and concepts by my classmates at college… I guess maybe I’ve been wrong all this time and I’m not a lesbian, but a straight woman. Perhaps I’m a gay guy!

Well, I understand these stereotypes and know those types of lesbians and gays. I am a lesbian, definitely not fitting in that stereotype, though, and I live with two gay guys that I get along with very well indeed. My brother is gay, my best friend is gay, and as it happens I have far more gay friends than lesbian friends. As it is with stereotypes, they are just that and not applicable to everyone out there. We’re all individuals and some people may very well be offended by this article. If the shoe fits, that is. My guess is… Read more »

Love your comment JB!! I think that the article may be addressing the way relationships are between gay men and lesbians in West Hollywood. In my community, gay men and lesbians are friends more so than with straight women. And guess what?! We can all speak the same language and understand each other very well (gasp!!). I think this article is in itself a stereotype.

This brings up many resonating points. I myself have plans today to hang out with my friend Rita, an overweight, short haired, flannel clad lesbian, who always travels in her pickup truck with her pit bulls. I don’t know what we’ll talk about though, as she has low verbal fluency and never understands the words I’m using. I’m almost always forced to quickly come up with synonyms to help her understand.