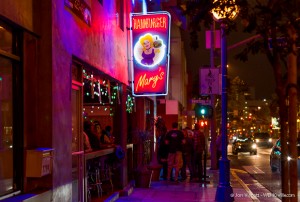 [dropcap]T[/dropcap]here are hundreds of places to eat and drink in West Hollywood, but as far as I can tell there is only one place to play bingo. Legendary Bingo at Hamburger Mary’s runs every Wednesday and Sunday with shows at 7 p.m. and 9 p.m., and I’ve been meaning to check it out for a while.

After all, it combines three of my favorite things: drag queens, oversized cocktails and raising money for a worthy cause. So when my boyfriend picked up an extra shift last Wednesday I decided it was the perfect opportunity to head down to Hamburger Mary’s for my first taste of drag queen bingo.

I had no idea the wildly entertaining evening I had signed myself up for.

I arrive a little early for Wednesday’s first game, and I’m glad I did — already there is a line of people clamoring for bingo cards, despite the very un-LA chill in the air and rain whipping down Santa Monica Boulevard.

Once inside, a gaggle of handsome servers and an uncommonly tall drag queen named ‘Roxy’ direct me to Jeffery “Bingo-boy” Bowman, the founder of Legendary Bingo.

Bingo-boy tells me he started Legendary Bingo almost 15 years ago at the now defunct Stonewall Gourmet Coffee. It was his way to raise money and encourage community involvement in AIDS Project Los Angeles outside of the “$1,000-dinners” that are the staple of so many of the big nonprofits. 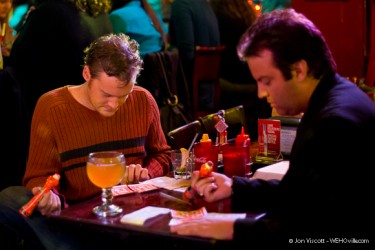 In the decade and a half since its founding, Legendary Bingo has grown far beyond WeHo. Regular shows can be seen in Silver Lake and Long Beach, and bingo now boasts more than 250 events a year, including private parties and corporate events.

“We are doing so well I’ve had to hire a couple of guys to play me so I can take a day off,” Bowman tells me. But I don’t think he takes as many days off as he could. He is a self-described “sucker for charity.”

Bowman supplies me a stack of bingo cards, a goblet of cranberry juice and vodka deep enough to drown in, and a sheet of paper handily detailing the rules of the various games ahead of us, which lists all of the ‘callbacks’ (audience participation lines).

“Sorry it’s so slow tonight,” he tells me as he hands me my bingo pen. “Must be the rain.”

I survey the bar, noting the all-but-packed house; every table is full except the two booths way in the back, closest to the kitchen. And the crowd is notably eclectic for the often-segregated West Hollywood. Lesbians, gays, and heterosexuals rub elbows and bubble with energy as they place their orders and organize their bingo cards.

But before I have time to ponder how packed Hamburger Mary’s must get when Legendary Bingo is really busy, Bowman leaves me, making his way toward the front of the room. Suddenly, our attention turns to the arrival of our evening’s hostess, the notorious Ms. Willam Belli (known for being asked to leave somewhat mysteriously while competing on “RuPaul’s Drag Race.”) 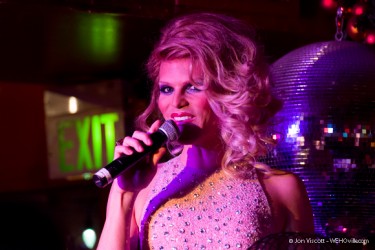 Belli slinks onto stage right on Jeffery’s heels, in a perfectly coiffed blond wig and a pink sequined cocktail dress, dripping class and sass. She instantly has the crowd hanging on her every word.

“What are we here to play?” she asks. “BINGO!” roars back the audience. “And how do we play?” she intones sweetly, like a preschool teacher who knows her class has this lesson down cold. “LOUDLY!” they yell.

This is the magic of Legendary Bingo.

The first round is pretty straight-forward. Just classic bingo. The first player to mark off a full row or column wins. Belli pulls the first ball. “B-2” she reads. The crowd shouts “BLESS YOU!” Our first callback of the evening.

The game is fast-paced and peppered with banter from Belli. “Whoever ordered that cheese dip is in trouble,” she says, glaring into the crowd. “That smell gets into everything, and this hair is human.”

I’m miles away from a full column or row on any of my three bingo sheets.

“BINGO!” shout two young ladies at a table near the stage. They leap out of their chairs, rushing to the stage with their cards thrust in the air.

Belli checks the claimants’ bingo sheets against the called balls and verifies that they have both achieved “bingo.”

Bingo Boy tells the audience “just like the Highlander, there can be only one,” and instructs the ladies both to “grab the drag queen’s balls” — bingo balls, of course.

The girl who pulled the low-ball reaches into “The Bag of Crap” and retrieves a bone-shaped chew-toy for her dog. The one who pulled the high-ball is declared the winner and forced to run around the bar while the losers chuck their crumpled up bingo sheets at her chanting “Pelt her! Pelt her! All the way down, and all the way back.” Upon returning to the stage, she is presented with a bag of victory schwag provided by this evening’s charity beneficiary, LifeWorks Mentoring.

Bowman announces the winning alignment for Round 2: “I Got B.O.,” which will be won — you guessed it — by filling the B and O columns. He welcomes to the stage the evening’s guest “celebrity ball-caller,” Erin Murphy, best known for playing the role of little Tabitha on TV’s “Bewitched.” 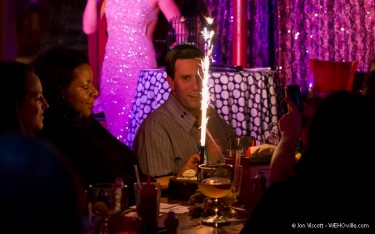 “J’accuse fromage” Belli replies archly (Which I’m pretty sure means “I accuse you, cheese” but my French is spotty at best).

Belli and Murphy have a chemistry that is both natural and entertaining. Willam asks Murphy about her time as a child-star between ball-calls.

“You must have avoided all the usual pitfalls of child-stardom,” Willam purrs, “‘cus you are alive ‘n shit.”

Round 2 brings me no closer to victory. Right after our second winner makes her triumphant procession around the bar, my (now nearly empty) goblet of cranberry juice and vodka is replaced by a lemon drop in a comically large martini glass by an adorably mustachioed server.

“Bingo is thirsty work,” he says.

Belli explains the parameters of Round 3, where the winning board will “Cover all Corners.” Murphy calls the first ball, “O-68” (“You do me, and I’ll owe you one.”).

Later, I’m within spitting distance of finally winning. “BINGO!” shouts a man at a table on the far side of the room.

I sip my lemon drop, and have a revelation about why my brothers love sports so much.

The challenge, the spirit of friendly competition.

Our would-be-winner strides to the front of the room, bingo card held high. Belli checks his card against the called balls.

Around these parts, False Bingos are dealt with harshly. How harshly? Public spanking and verbal humiliation by our drag hostess.

The actual victor ends up being a swarthy gentleman with model good looks and a light (British? Australian?) accent sitting at the table next to mine. He takes his shirt off as he completes his victory lap. 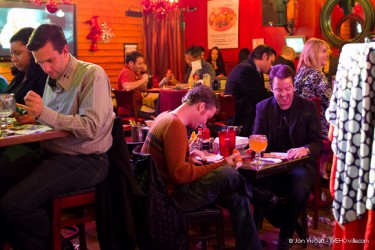 I tell our new champion that I’m a member of the press. And though he doesn’t quite look as though he believes me, he lets me root through his schwag bag anyway. This is as close as I will come to winning Legendary Bingo.

I learn that tonight’s winners have scored themselves Ken dolls, fancy soap, a book about style, and a trivia game with the improbable name “Bezzerwizzer.”

I’m so into pawing this dude’s schwag that I completely miss the explanation of this round’s rules. And when, upon scoring my first full column of the evening, I shout “Bingo!” I know instantly I have made a mistake.

“Get up here and take your licks,” she says, smiling wickedly.

I slouch up to the front of the room, prepared to take my punishment like a man. And after receiving my public paddling (“One! Two! Three!!”) I return to my seat, duly chastened.

After the final ball is called I knock back the last of my lemon drop and head back out into the misty streets of West Hollywood, already planning my Legendary Bingo comeback.

‘I’m a Dick but People Tend to Like me Because I tell the Truth’:
A Conversation with Legendary Bingo’s Willam Belli 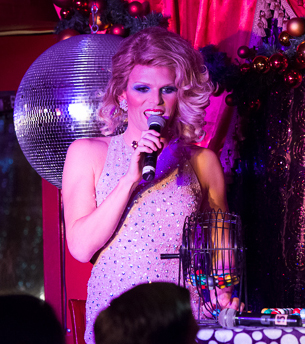