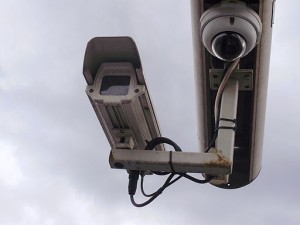 Last Monday, in response to two shootings in Plummer Park, the West Hollywood City Council considered the installation of security cameras there. The discussion began with numerous East End community members voicing support for a city staff recommendation that cameras be installed to deter criminal activity in the park. Among the concerns cited by those residents were recent violent crimes, homeless people sleeping in the park, illicit drug use and lewd conduct in the park after hours. That was followed by a presentation by members of the Los Angeles County Sheriff’s Department, who pointed out the advantages of using cameras to help law enforcement address these issues.

City staff advocated a test of a system in which a security camera would be used only after the park closes at 10 p.m. The cameras would be equipped with a motion detector that would be activated by someone in the park after the posted park closing hour. When triggered, the security camera would email a 10-second video to the West Hollywood Sheriff’s Station’s communications/dispatch center, which would review it for signs of criminal activity that might require sending a deputy sheriff to the park. In addition to helping the Sheriff’s Department constantly patrol the park after closing, the security cameras would be a deterrent to unlawful activitity there. They are more cost-effective than staffing the park with a uniformed deputy all night, and the video could help solve serious crimes and aid in identifying violent offenders.

Unfortunately, the council was unable to reach an agreement on the security cameras. Ironically, Councilmember Duran, who seems to have very little issue with violating our community member’s First Amendment rights to freedom of speech, became the self-proclaimed champion of the Fourth Amendment, which prohibits government from conducting unlawful searches and seizures. In his comments, Councilmember Duran even went so far as to quote Thomas Jefferson in his razzle dazzle appeal for not supporting security cameras in the park. Under the guise of protecting the public from the eyes of law enforcement, he argued that a camera would be unable to decipher lawful versus unlawful or suspicious activity. He further played up fears of Big Brother using “cameras who are going to be spying on the guilty and innocent alike.”

Councilmember Duran makes his living as an attorney defending people arrested for suspected violations of lewd conduct and illicit drug laws, among other crimes. Does anyone think that there might be a conflict of interest here? Perhaps his interest is less in protecting our Fourth Amendment rights and more in preserving his ability as a defense attorney to litigate away criminal activity based on hearsay in court, creating, as he did at the council meeting, a shadow of doubt. Let’s be clear: video does not lie. Thus, it would be more difficult for Councilmember Duran to defend someone charged with violations of criminal codes and ordinances if law enforcement had video evidence to support the probable cause for making arrest.

 Because the city ordinance states that Plummer Park is closed from 10 p.m. to 6 a.m., it is a misdemeanor to be in the park after closing. Hence, Councilmember Duran’s assertion that cameras would be spying on the guilty and innocent alike does not hold true. The proposal outlined by city staff clearly stated the motion-activated security cameras would be set to operate only during hours when the park is closed. Thus, anyone caught on camera would be committing a misdemeanor and subject to arrest.

In such a situation, a sheriff’s deputy would be dispatched to determine if more serious crimes were afoot or whether, perhaps, a resident who got off work late just needed to walk his or her dog. The deputy would then have the discretion to choose how best to remedy the situation (i.e. give a warning, document the contact with a field identification card, or for more serious crimes make an arrest.)

The second major flaw in Councilmember Duran’s argument, which I applaud Councilmember Heilman for raising in his support for the security cameras, was his misrepresentation of the scope of the Fourth Amendment. It says: “The right of the people to be secure in their persons, houses, papers and effects, against unreasonable searches and seizures, shall not be violated, and no warrants shall issue, but upon probable cause, supported by oath or affirmation, and particularly describing the place to be searched, and the persons or things to be seized.” Unless we missed it, I did not see parks, public spaces or Plummer Park in the citation taken directly from the Fourth Amendment.

A park is a public place, and Supreme Court has asserted numerous times that we do not have a reasonable expectation of privacy in a public place. As a matter of fact, the Supreme Court ruled this past week that, like members of the public, law enforcement officers have no right to expect privacy in public that would preclude a member of the public from videotaping their actions. Hence anyone in a public place is subject to the eyes of the public and has no constitutional expectation to privacy. In the case of Plummer Park security cameras, only those people in violation of our city ordinance would be subject to being caught on video.

Mayor Prang, said that “sufficient information from users of Plummer Park … leads me to believe that additional measures were needed to ensure that people not only felt safe at Plummer Park but were safe.” But he waivered on moving forward with implementing security cameras, even though they are more cost-effectiveness than sheriff’s deputy patrols .

If a safer Plummer Park is what we truly desire, a test of motion detector-activated security cameras is a great and cost-effective tool to help our law enforcement professionals keep our city and our park safe. I would strongly support the Public Safety Commission standing fast and not waivering in its support of the pilot security camera program. In addition, I would strongly urge them to deliver to the council the exact same proposal with a request to use the best cameras to ensure the video footage is of the highest quality, which would aid in identifying suspects in serious crimes that might occur in the park. I also would advocate a year-long pilot program to fully evaluate the effectiveness of the cameras. If we are going to doing something to combat crime in our city, we should do it right the first time and set the program up for success. If we choose a lower grade camera, chances are the video quality also will be of lower quality, which could hamper law enforcement’s ability to identify people suspected of serious crimes.

Perhaps in the end, the only people who would lose with the video surveillance footage are Councilmember Duran and the clients he defends – a small price to pay for a safer Plummer Park.

I agree with LANDAVAZO
The “waiver” thing is a very Jeffrey Prang thing to do.

uhhh… i believe the author meant to say that Jeffrey Prang wavered (not “waivered”) on moving forward with the cameras. and he clearly did misunderstand the purpose of having the item tabled. but now “WeHo” agrees with the author on the misspelled description for a procedure he misunderstood? it’s getting to be confusing. regardless, i find the idea of John Duran opposing surveillance cameras in order to protect his clients rather amusing. almost as amusing as the author’s suggestion that officers be dispatched when someone enters the park “to determine if more serious crimes were afoot”. i’m getting a little… Read more »

@Mayor Prang – Thank you for the explanation. It seemed odd that since you were recommending cameras be tried, and that the city staff and Sheriff’s Department experts were recommending it be tried out, and since a majority of the public speakers were in favor of a pilot program, to have it voted down would seem to confirm the feeling that some of the Council members are not representing the people, but rather pushing their own agendas.

The author seems confused about how city council meeting procedures work and the nature of my actions on this matter at the City Council meeting. I authored the proposed the installation of security cameras at Plummer Park several months ago, and the item on the Nov. 19th agenda was the staff evaluation in response to my initiative. They recommended that we adopt the security program on a pilot basis. Because Councilmember D’Amico was absent at the meeting, and because support for the security camera system was divided 2 -2 among those councilmembers present, I moved instead that the matter be… Read more »

I’m getting a huge kick out of seeing Chris Landavazo rip Duran’s iconic image apart every time he has a chance to write something. Kudos! John Duran has been resting on his past performance as an HIV-freedom fighter for too long, while he does NOT serve the people’s wishes. There are two sides to Duran and most of the public doesn’t see the side that has been involved in destroying the best interests of the community for far too long. Keep it up Chris. We need new blood and new ideals pushed into our city government. It’s been too long… Read more »

Having cameras in the park gives a chance that a suspect description can be obtained. This is a solution that can be tested quickly and cheaply. Landavazo is correct on this one.

Several studies of publicly-funded camera projects show that they have little to no real effect on crime. However, they do have a feel-good effect for citizens.

As I remember, during Council budget discussions, CM Duran also commented that the City didn’t need a larger Sheriffs budget even though residents — eastside, westside and center city — have been asking for more patrols in the residential neighborhoods for years. Clearly, Duran has lost touch with WeHo residents — it’s obvious from his votes regarding public safety issues as well as development issues.

I believe cameras are not the solution to the Plummer Park problem. Better lighting, eliminating creepy places to hide, and perhaps altering the flow of walkways in the park, as well as making other physical improvements will go a long way toward reducing the appeal of Plummer Park as a place to conduct shady business. These steps in addition to a permanent bike/foot patrol in and around the park are far superior to just slapping a few cameras up and creating a false sense of security. Cameras can’t see everywhere, and not all illicit activity in the area takes place… Read more »

I spoke at the Council Meeting in favor of cameras at Plummer Park. It was ironic that entering the elevator of the new parking structure we noticed that there was a security camera in the elevator. I am sure most users of Plummer Park would feel more secure knowing that security cameras were watching out. I have read “1984” by George Orwell at least 6 times, but I do not fear security cameras in public spaces. With the bonds already sold to “redevelop” Plummer Park I am sure there is enough to purchase the best system that exists.

it’s hard to believe that in this day and age there exists a ‘low quality video’ option for security cameras. even my relatively basic phone has HD video and can be streamed as a webcam 24/7, it also shoots great in low light. i’d like to see the city not overpay for once.

no, nothing can replace actual sheriff’s patrols but quoting jefferson was idiotic and a clear sign of grandiosity. a basic motion sensor/light /camera setup would help the sheriffs maximize their efforts and allow them to lighten up on patrols when they aren’t needed.