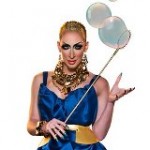 Logo has announced the lineup for its fifth season of “RuPaul’s Drag Race,” and once again a resident of West Hollywood is on the list. This time it’s the awkwardly named Detox Icunt, who currently performs at Dragstrip 66, a drag bar in Echo Park. Ms. Icunt, a native of Orlando, describes herself on her Facebook page as “a diamond clusta’ hustla’. Queen bitch. Supreme bitch.” (We all know one of those). Sutan Amrull, a makeup artist better known as Raja and also a WeHo resident, was winner of season three of Drag Race and was the makeup artist for nine seasons on America’s Next Top Model.