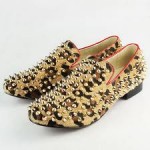 Listen up if you’re a guy with a shoe fetish and a big wallet. The signature red awning and a Louboutin sign now adorn the facade of 657 N. Robertson Blvd. (just south of Santa Monica), suggesting that Christian Louboutin’s long-awaited West Hollywood men’s shoe boutique is opening soon. Images of Louboutin’s studded loafers (only $1,400 a pair!) are in the shop windows. The boutique is adjacent to Louboutin’s women’s shop. A story about Louboutin this week in Footwear News says the French designer hopes to open the store before the holiday shopping season, which in the U.S., of course, starts Friday. Louboutin also told Footwear News that he loves Los Angeles (we hope he means WeHo). “I can concentrate more there (than in New York) because it’s a nine-hour time difference with Paris,” he said. “I can speak to my office when I wake up in the morning and then again when I go to bed. New York is more exhausting. I also have very good friends in Los Angeles. I’m always happy there.”