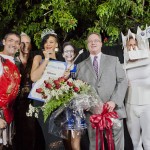 The Queen of West Hollywood’s refusal to speak to the press or her fans sparked a revolt on the 777 that is flying her, 150 music journalists and 100 crewmembers and competition-winning fans around the world on a concert tour.

Rihanna, WeHo’s only real queen, (she accepted the crown on Halloween night from the West Hollywood City Council, which snuck out of town to anoint her and bow and scrape at the Greystone Manor in Los Angeles) has declined to speak with the on-board press or the contest winners during the week-long flight, which ends tomorrow (Nov. 20) in New York City. Perhaps she was taking a leaf from the WeHo council members, who refused to alert the media or the public to their ring-kissing adventure on Halloween.

There were consequences to Rihanna’s attitude of noblesse oblige. The Daily Mail reports that a frustrated Australian journalist streaked through the plane naked on the Berlin to London leg of the flight. His fellow journalists quickly captured the adventure on video.

Maybe a bit of streaking at WeHo’s council meetings might prompt more engagement with the media and the public. Just sayin’.