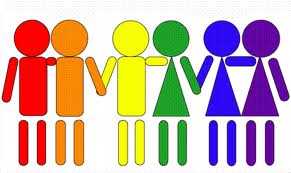 I read in the newspaper about “gay” rights. Sometimes I read about the “LGBT” movement. I’ve also read about “lesbians”, and “homosexuals”. Sometimes I see the word “queer” used by gay people, which I thought was offensive. And the other day I saw a really strange set of letters — LGBTQI — which I think means “gay.” It’s all very queer (in the old fashioned sense of the word) to a heterosexual woman like me who would call herself “straight” except for what arthritis has done to my back. Where did all these letters come from? Is there a dictionary somewhere that explains all this? What is the right way to refer to my homosexual/gay/lesbian/queer/LGBTQI friends so I don’t offend them?

This past January a law went into effect in California that requires public schools to teach gay history. Some of us wish the state also would provide classes to help gay kids (and continuing education to help gay adults) keep up with the evolution in how we homosexuals describe ourselves.

First thing you need to know is that “homosexual” is the word that encompasses both women who have a thing for women and men who have a thing for men. But you also should know that it’s an awkward, clinical word that isn’t much used outside of academic research. Even newspapers, those custodians of traditional language, have abandoned it. Whereas The New York Times reported in 1963 that homosexuals were privately calling one another “gay,” in 1987 the newspaper was routinely using “gay” in referring to members of the homosexual community.

Lesbians, thought by most researchers to be a minority within the overall homosexual world, eventually insisted on using their own moniker so as to stand out in a homosexual culture pretty much dominated by men (gay or straight, we guys are pretty insensitive that way). So “gay” generally came to mean a homosexual man. And “lesbian” was used to refer to a homosexual woman. However, when someone wants to refer to the entire same-sex-loving crowd, “gay” still is the word that’s generally used for want of anything better.

After that, it gets more political. Leaders of the gay rights movement, which really took off in 1969, began to bring other sexually diverse groups under what became the LGBT tent. The “T” in LGBT, for example, stands for “transgender,” a term that describes people who see themselves as being trapped in the body of the wrong sex. A biological man who in his heart and mind is a woman, would describe himself as transgendered. For a female example of that, consider Chastity, now Chaz, Bono. Interestingly, transsexuals aren’t necessarily homosexual. A guy who becomes a woman and goes ga ga for guys clearly isn’t seeking a same sex partner. You’ll note that Chaz is dating a girl, which means he’s definitely not a lesbian.

The “B” refers to bisexuals, a group that gay men are divided about. Many gay men consider bisexual men to be guys unwilling to own their homosexuality — fence straddlers, if you will. “Q” is a relatively recent addition to the homo alphabet. It stands for “questioning,” a term that describes those who are uncertain of their sexual orientation or gender identification and are exploring the options. It’s a term most often applied to young people. Finally there are the “I’s.” They are “intersexuals,” people who physically possess characteristics (and often distinctive organs) of both sexes. “Queer,” by the way, is a term disliked by some gay people — usually the older ones. But it has been embraced by younger gays as a symbol of defiance against those who want to use the word as a slur.

So what do you call your homosexual/gay/lesbian/queer/bisexual/transgender/questioning/intersexual friends? Keep it simple and go with “gay” if it’s a guy into guys and “lesbian” if it’s a gal into gals. “Trannie” and “queer” are best used only with friends with whom you have a very intimate relationship, which might mean that you are “questioning.” And if it’s an intrasexual, just call that friend by his or her first name.