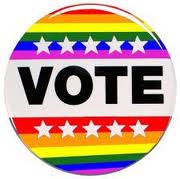 The survey, based on interviews with more than 120,000 adults across the country, is the largest sample of LGBT men and women ever conducted. It was conducted between June 1 and Sept. 30 of this year. It found that 71 percent of LBGT Americans who are registered to vote supported Obama for re-election while 22 percent supported Romney. By contrast, 47 percent of non-LGBT registered voters who were surveyed supported Obama over Romney, who had the support of 45 percent. That suggests LGBT votes were an important factor in Obama’s close win over Romney in the popular vote. Romney’s LGBT supporters tended to be older, white, more religious, and more likely to be married, the survey found.

The survey also found that 45 percent of LGBT people describe their political views as liberal or very liberal and 20 percent describe themselves as conservative or very conservative. That compares with 23 percent of non-LGBT Americans surveyed who say they are liberal and 39 percent who say they are conservative. LGBT and non-LGBT individuals are almost equally likely to think of themselves as moderate (35 percent and 38 percent, respectively).

One concern is that LGBT Americans are somewhat less likely to be registered to vote. The survey found that

74 percent say they are registered or plan to register to vote, compared with 80 percent of non-LGBT men and women.

The Williams Institute was founded in 2001 with a grant from businessman and academic Charles R. “Chuck” Williams. Its mission is to conduct independent research on sexual orientation and gender identity law and public policy.