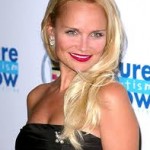 We go to Joey’s on Santa Monica and Sweetzer all the time for the great chimichanga (and, of course, to flirt with Dillon and Drew, the handsome waiters). But who knew it was becoming a celebrity hangout? Life & Style reports that Jake Pavelka, a former star of ABC’s The Bachelor, and Kristin Chenoweth, former star of ABC’s GCB, were mooning over one another at Joey’s last Tuesday (Nov. 13).

“Kristin and Jake walked into Joey’s Cafe in West Hollywood on Nov. 13 and sat together at a cozy table,” an eyewitness said. “They both had sunglasses on like they didn’t want to be recognized … They had lunch and held hands across the table. They started to kind of nuzzle and Jake seemed so into Kristin. He looked like he was star struck and in love at the same time — just beaming and smiling the whole time.”

In addition to their lunch in West Hollywood, the two were spotted together at the Barbra Streisand concert at the Hollywood Bowl last week. Gorgeous as those two are, they could never distract us from Dillon and Drew (have you seen them in shorts?)