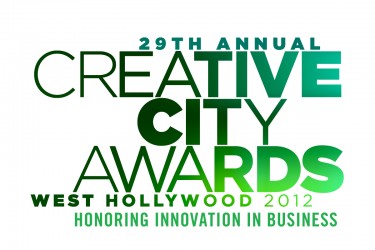 The Creative Startup award went to the Sunset Strip Farmer’s Market. The market, which opened this past summer, provides fresh, California-grown produce and artisanal products. It is the creation of a group of local residents and business owners. They include Nick Mathers, owner of the Eveleigh restaurant; David Vialli, general manager of The Standard Hollywood hotel; Bruce Silberman, owner of Allied Parking, and Nic Adler, owner of the Roxy Theatre. Others active in launching the market are Diana Rodgers, who chose the participating farmers and vendors, and Steve Portigiani, who designed the space. The market is open Thursdays from 5 to 9 p.m. at 8755 Sunset Blvd., near Sherbourne.

Winner of the Corporate Innovation award was Sur Restaurant and Bar. Sur, located at 606 North Robertson Blvd. near Melrose, offers diners a European menu and vibe influenced by the London restaurants and bars owned by Ken Todd and his wife, Lisa Vanderpump. Todd and Vanderpump, who also is a star in the “Real Housewives of Beverly Hills,” share ownership of the restaurant with Guillermo Zapata, its manager for the past ten years, and his French wife Nathalie. Sur recently added a lounge to the restaurant, which features dining indoors and in a garden outside.

The West Hollywood Beacon award winner was the Abbey, one of the city’s most famous bars and restaurants. The Abbey, located at 692 N. Robertson Blvd, just south of Santa Monica, was opened as a coffee bar across the street from its current location in 1991 by David Cooley. Cooley, president of the Abbey, has shepherded its growth into a bar and restaurant that attracts West Hollywood residents, tourists, and area celebrities. It is famed as the place where the late Elizabeth Taylor would drop in for an occasional drink. It is the site of an annual Academy Awards party, “The Envelope Please,” sponsored by Esquire Magazine and has raised more than $150,000 a year for AIDS Project Los Angeles. Cooley is active in Toys for Tots, Aid for AIDS, South African Families and People with AIDS. The Abbey is owned by the SBE hotel, restaurant, and nightclub group.

Winner of the Creative Communications Award was HBO. The cable channel, owned by Time Warner, is a contributor to West Hollywood’s celebrity culture through its staging for the past 10 years of an annual Emmy Awards event at the Pacific Design Center. The event is considered the most extravagant and elaborate of Emmy after-parties.

The John Chase Art & Design Award went to the Christopher Guy showroom. Christopher Guy’s West Hollywood showroom is one of two flagship locations where furniture from the Christopher Guy Harrison design portfolio is on display (the other is in High Point, NC.) The 10,000-square-foot showroom opened this past July at 8900 Beverly Blvd. near North Swall. The Guy showroom hosted a reception for Emmy-nominated art directors and set directors in September. The award is named for John Chase, a writer and urban designer for the City of West Hollywood who played a major role in the redesign and reconstruction of the city’s portion of Santa Monica Boulevard. Chase died in 2010.

Todd Elliott was recipient of the Creative Community Service award. Elliott, an attorney with Truman & Elliott LLP, focuses his practice on land use, environmental issues and historic preservation. He often represents clients in appearances before planning commissions, city councils, and other governmental bodies. Elliott also is a licensed commercial real estate broker. He served on the City of West Hollywood’s Redevelopment Agency from 1996 to 2004 and has sat on the boards of both the West Hollywood Community Housing Corporation and the West Hollywood Chamber of Commerce since 2003.

The Chamber also honored Zev Yaroslavsky with its previously announced Thomas Crail Lifetime Achievement award. Yaroslavsky is a member of the L.A. County Board of Supervisors representing District 3, which includes the San Fernando Valley, the Westside of Los Angeles and coastal areas between Venice and the Ventura County line. He was a member of the Los Angeles City Council from 1975 to 1994. The Crail Award is named for Thomas Michael Crail, former executive director of the West Hollywood Chamber of Commerce, who died in 1995.

The awards event included a silent auction and performances by Louie Cruz Beltran, an American Latin jazz musician, and by Lee England, Jr., a classically trained soul violinist. The master of ceremonies was the comedian ANT, a regular guest on the Tonight Show with Jay Leno and the Tyra Banks show. The chamber, whose president and CEO is Genevieve Morrill, is the leading advocate for business and commercial interests in West Hollywood.