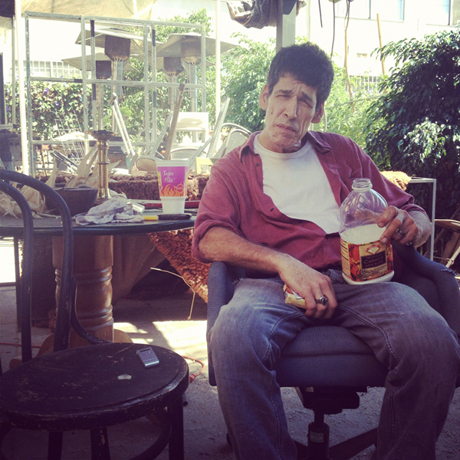 If ever there was a spot on God’s great earth in need of a garage sale (or an episode of Hoarders), the backyard of what was once Crescent Heights United Methodist Church is it. Heat lamps, candlesticks, old wooden chairs and a headboard all stand at attention. Scott Imler, the former pastor, sits holding a quart of Trader Joe’s carrot juice and cigarette that he eventually lights but barely smokes.

The church was discontinued a little more than a year ago, and Imler’s been living here ever since as the caretaker – but now even that is coming to an end. The Methodist Church has served him with an eviction notice. They want him out by the end of the month.

“The bottom line is, it’s a land grab,” Imler says. “You have a denomination that’s in deep financial trouble. And they’re making these calculations all over the place about who to eliminate and sell off.”

Cedrick Bridgeforth, a district superintendent for the Church, disagrees with Imler’s characterization, which he feels has been parroted by a number of media outlets: “The Church has been painted as this evil beast, lording over the weak and the few. That is not the case.”

Some have speculated that the parish’s closing has to do with Imler’s views on gay marriage and medical marijuana, but Methodist officials insist it’s a simple question of math: their denomination is shrinking. Like any business, it’s taking less money in and is forced to consolidate. But this explanation doesn’t satisfy Imler, who sees the church bureaucracy overturning the needs of the community in the service of, at best, the bottom line, and at worst, some personal grudge against him.

And so he sits in the church, like some holed-up bank robber, awaiting the inevitable.

Scott Imler is not your typical pastor – even for a faith as liberal as Methodism. Not only is he gay, not only does he smoke medical marijuana (for his epilepsy), not only did he grow marijuana on church property, but he is one of the leading activists for both medical cannabis and gay marriage in Southern California.

He first moved to Los Angeles in 1995 to gather signatures for Proposition 215, which he co-authored. The measure passed, making medical marijuana legal in California – for the most part. It was still, after all, illegal at the federal level, and has existed, ever since, in a kind of legal gray area, a hostage to the prevailing winds of different federal and local politicians.

“He was able to convince a lot of opinion makers about the legitimacy of his cause,” said West Hollywood City Councilman John Duran, who used to work with Imler as a lawyer. “Including a lot of us who thought his cause was way out there.”

It was a momentous year for Imler: Shortly after the election, he moved to West Hollywood, started the Los Angeles Cannabis Resource Cooperative (the first marijuana dispensary in the county), and perhaps most importantly, he joined Crescent Heights United Methodist Church.

“I was already partnered with my husband for 10 years,” he said. “I wasn’t really a party boy. I got here in ’95, and I started looking for a way to connect people besides alcohol and drugs.”

If Crescent Heights Church became an escape for Imler, it was also an ally, overwhelmingly supportive of Scott’s cause.

“He really throws himself into whatever he does,” said John Griffith, the pastor who preceded Imler. “As a former Bishop once said, Scott is very transparent. He doesn’t hide his emotions or his convictions.”

Imler’s pot shop was busted by the Bush administration three weeks after 9/11 (“I guess they didn’t’ have anything better to do”). The case dragged on for two years, until a plea deal was worked out – Imler got off with one year of probation and a $100 fine. The next week he had surgery to remove the top half of one of his lungs to get rid of a cancerous tumor. The surgery was successful, although part of the left side of his back collapsed. As a result, his neck is now roughly perpendicular with his spine.

Imler’s trials, both literal and metaphorical, brought him closer to the church. He became a lay leader, went to seminary, and was appointed as the pastor for Crescent Heights in 2005. This was somewhat unusual. Most pastors are itinerant, and they’re assigned to a parish of the church’s choosing.

Part of him wonders if this was a mistake all along: “Jesus said, ‘You’re not a prophet in your own home town.'”

As pastor, Imler continued to advocate for both medical marijuana and gay marriage.

“During the whole Prop 8 campaign, that became his number one cause and priority,” Bridgeforth said. “He gave all he had for that. And that’s not a bad thing. The issue was on his doorstep. Whatever is on our doorstep is a priority. I would say that strengthened his ministry and probably prolonged the inevitable.”

Crescent Heights United Methodist Church was already on financially shaky ground even by the time John Griffith took over.

“The church has had a history where it’s kind of been on the chopping block to be closed for many years,” Griffith said. “As long as you’re paying the bills, the conference doesn’t bother you too much. But the moment you stop covering your bills, they start taking note.”

When Imler took over there were only about 20 to 30 congregants. In 2008, the Annual Conference placed the church in the category of “moving toward discontinuance.”

“They were not attracting people, they were not retaining people, not paying bills and the building was falling down around them,” Bridgeforth said. ” It was not a sustainable congregation.”

Imler denies that the church was broke: “At the time, we were quite soluble. We had money in the bank. All our bills were paid on time. Everything was fine.” He admitted, however, that he was not taking a salary, and that his husband, George Leddy, a science professor at Los Angeles Valley College, was paying for some of the repairs. The Methodist Church may have seen that as a bad sign.

And so Crescent Heights moved inexorably toward closing. To get Imler to go along quietly, the annual conference offered him a deal: let the church be discontinued, and he would be allowed to stay on as caretaker. The church could still do everything it had been doing, such as taking in homeless and drug addicts, hosting 12-step meetings, doing community outreach. The only difference would be that there would no longer be Sunday services.

“Much to my own discredit I went along with them,” he said.

Even though Imler was told that little would change, he must have known that the deal would have immediate consequences for him personally. With one simple vote, Imler was no longer a local pastor, or a candidate for ordination, or a member of the annual conference.

“I instantaneously became a non-person, completely, in terms of the Methodist Church,” he said. “I wasn’t even a Methodist anymore.”

Imler’s career as a caretaker was short-lived. Bridgeforth said Imler never signed a work agreement (Imler said the Church never signed it), and, more to the point, wasn’t doing a very good job.

“Responsibilities that were expected of him were not carried out,” Bridgeforth said flatly.

Imler said that, to pass the time, he started collecting old junk, some of which he found on the street, refurbishing it and giving it away. But to Bridgeforth, the property, which was still owned by the church, looked like a disaster, a pack rat’s paradise.

Finally, at the end of July, the Church served Imler with an eviction notice. They want him out by the end of September. Imler says he’s ready to go – as soon as the Church pays him the money they owe: $9,000 in back salary, $23,000 for money his husband George paid to cover utilities and repairs, and $80,000 in unpaid medical bills for injuries Imler sustained while putting out a fire he says was started by a homeless person he took in.

But Imler is also considering a lawsuit aimed at stopping the Church’s redevelopment plans for the property, which entails tearing down much of the current building (since it is considered a historic cultural landmark in West Hollywood) and replacing it with a 30-unit apartment complex, which the Church says will provide much needed low-income housing for the community.

“What’s there now is unsafe,” Bridgeforth said. “What’s proposed is 10 times better for the community.”

Imler contends that the redevelopment plan is unfair to the former congregation and constitutes a land grab. Bridgeforth contends that they’re simply responding to the financial reality of the day. All mainline denominations have fallen on hard times, and all have been forced to close down churches.

“Episcopalians, Lutherans, Methodists – all are in decline, and have been for three decades,” he said. “Folks like us that tend to be more liberal and theologically progressive are shrinking in number. That’s just a reality.”

Bridgeforth added: “This has very little to do with Scott.”

Unless Scott has been saying that he was THE pastor appointed in 2005, then I need to correct that: I was one of the three appointed there in 2005 but left because of my new appointment in Bellflower.

I hope reconciliation is still possible in this heartbreaking case.

No wondering necessary, Yvonne. But you’ll be hard pressed to find the answer in Hillel Aaron’s WEHOville article. Perhaps an acorn of truth here and there but they’ve definitely missed the forest for the trees. But there is plenty of that going on as well. I’m curious however about what you find so hilarious – other than the photograph, which I must say IS pretty funny. Luckily, for me, no one in Hollywood looks like their picture. The demise of Crescent Heights Church defies easy or amusing explanation. City Council member John Duran recently asked me, “Scott, why are you… Read more »

This cracks me up, I love it, it’s hillarious. Do you have to wonder why this situation lead to it’s own distruction???

I also did not like the tone of this article and the Plummer Park article…very biased against both. This does not seem like a neighborhood publication at all – more like a rag against a City.

I actually found this article, and this news site as a whole, quite informative and interesting.

Never have I read a more biased attack on a West Hollywood resident and cultural icon from anything approaching a “local” publication, The title of the article is clearly meant to demean the leader of a movement to provide medical marijuana’s benefits to thousands of Californians who need it to gain surcease from cancer, epilepsy, and countless other incurable maladies. To call Mr. Imler the “Pothead Pastor not only insults him but the movement and the City of West Hollywood, which went through time and expense to foster his efforts. The fact that the writer went out of his way… Read more »