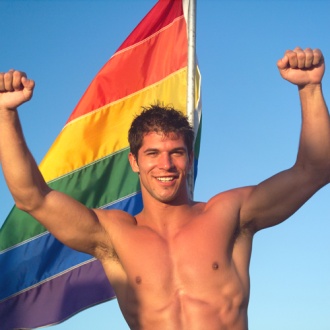 I just heard that the West Hollywood City Council spent $67,000 to paint a couple of crosswalks at the intersection of Santa Monica and San Vicente boulevards in the gay rainbow flag colors. Yuck! If you gay guys are so stylish, what’s with this tacky rainbow flag thing? Don’t you think Yves Saint Laurent, Gianni Versace and Halston are rolling in their graves?

Well, Halston, Versace, and Saint Laurent died long after the rainbow flag was invented by Gilbert Baker, the gay Betsy Ross. So while they may have viewed his bizarre spangled banner with a fashionista’s contempt, they probably had grown used to it by the time they were forced to don their angelic white robes.

Baker put thread to needle in 1972, when, after an honorable discharge from the U.S. Army, he settled in San Francisco. Like many a gay man of his era in that city, he promptly taught himself to sew. On his website, he explains that he couldn’t afford to buy the glittery clothes his idol, David Bowie, wore. So he decided to make them.

Baker designed the rainbow flag for the San Francisco Gay Pride parade in June 1978 (when, I’m guessing from your use of the words “dude” and “bro,” you weren’t yet born). The original flag featured eight colors, each symbolizing something: hot pink (sexuality), red (life), orange (healing), yellow (sunlight), green (nature), turquoise (magic), indigo (serenity) and violet (spirit). By 1979, the flag had been simplified into six stripes, dropping the oh-so-gay turquoise and pink and changing the indigo to blue.

So why do we gays wave this gaudy rainbow flag? Well, WeHo DudeBro, those in our community who try to parse these things have two theories, which aren’t entirely contradictory. One is that style, for some of us, is larded with oodles of flamboyance. Would you really expect a guy whose handcrafted gym shirt, showing both of his nipples, to be into understated minimalism when it comes to a flag? Another theory is that it’s the gay “daddies” (those guys in their fifties and sixties, which includes much of the West Hollywood City Council) who can’t let go of the flag that inspired them at a time when it was difficult if not dangerous to be gay.

Like beauty, DudeBro, style is in the eye of the beholder. If the rainbow colors really freak your sense of style, we can recommend some Moss Lipow sunglasses that will dull their flash. They’re a steal at $3,800 — just 6% of the cost of those crosswalks. But if you wear them, we can’t promise some gay guy won’t hit on you while you’re in that crosswalk on Santa Monica Boulevard.

I would rather have something that people can take pride in today rather than a hideous relic that no one can take seriously. The gay community urges you to be “TRUE TO YOURSELF 1000%” yet has become somewhat of a personality cult. Urging people into a feeling of inadequacy, sexually, physically and emotionally. I guess it can’t be helped when today you have to have a platform of strength and defiance in order for you to be accepted in the public eye, But it really is hard on those of us who just want to pursue our own aspirations and… Read more »

I think the original idea of painting the crosswalks to celebrate Gay Pride in the city was an inspired idea. I think that they do remind those that attend; it’s not just an excuse to drink, etc. Their is a real history there and another in this city. I think our history should be celebrated and shared. West Hollywood (like San Francisco and New York) is a place to come to discover yourself. It’s one of the first cities (after coming out) that I personally felt most comfortable in. I wish that the city would embrace more of it’s founding… Read more »